Below is a reprint by Wayne Moore. 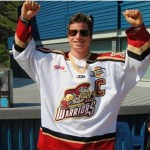 The BC Hockey League’s westside franchise has been re-born.

Tuesday morning, the franchise officially became the West Kelowna Warriors as the club attempts to build on the success of West Kelowna’s Hockeyville campaign.

“If we learned nothing else through Hockeyville it’s that this community’s pride is stronger than any other community in Canada, and we saw how strong we can be as a community when we all came together behind one flag,” says Hockeyville co-chair and Warriors Director of Business Operations, Andrew Deans.

“When it was over (Hockeyville campaign), we started to think about the impact Hockeyville had on our community, on our team and we thought of teams we supported in the past.”

Warriors head coach and general manager, Rylan Ferster, says it’s an exciting day, not only for community pride but also for team identity. “You’re always trying to create an identity for your team. When the players put the jersey on you want them to understand it’s a privilege to play for the community,” says Ferster.

He says it should also be a little easier from a recruiting standpoint because people from other cities and provinces will automatically identify with West Kelowna where westside required some explanation.

“I know a little bit about name changes,” quipped Mayor Doug Findlater.  “More and more we’re seeing this kind of change take place in our community and it does fit. It’s a very good move by the Warriors. From a marketing and loyalty perspective it just makes sense.”

Findlater says on behalf of the municipality, ‘we’re honoured to share the name West Kelowna with the Warriors.’ 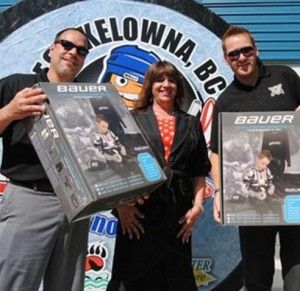 Prior to the announcement, Deans and Hockeyville co-chair Adam Less presented Westside Minor Hockey and KidSport with 50 sets of hockey equipment.  The equipment was purchased by Canada News Wire (CNW), the company that inadvertently spilled the beans several hours before the official announcement was made.

Minor hockey spokesperson, Julia Fraser from Accent Inns, says the equipment, which will fit players age five to 10, will be shared between minor hockey and KidSport.  She says the logistics of how the equipment will be dispersed are still being worked out.

Meantime, Fraser says the wheels are in motion for Westside Minor Hockey to re-brand itself West Kelowna Minor Hockey in keeping with the Warriors announcement.  While the change needs to be approved by the association membership, likely at the next Annual General Meeting next spring, Fraser says OMAHA (Okanagan Mainline Amateur Hockey Association) and the BC Hockey Association have both given their approval.