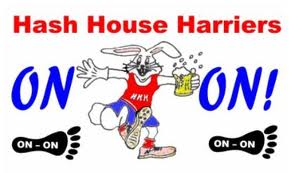 Have you ever seen a group of totally diverse and unrelated people running madly about, following symbols marked in flour and shouting nonsensical terms like “On On?”  If you have, they would have been Hash House Harriers – an International Drinking Group with a running problem.

Although I had actually heard of this group, I didn’t really understand what they were all about until I experienced my first Darkside, Leapday, After Dark Run on Feb 29th.

I went expecting an athletic adventure, possibly a race.  What I found was a totally quirky activity that was as much social as athletic.  The group consisted of both genders and ages ranging from late teens to seventies and even a few dogs.  The only thing that many people seemed to have in common is that they had either worked or studied in at least one other country.

It began with the group running or walking (or both) along a trail marked with flour symbols.  The faster participants were 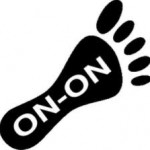 tasked with checking out the dead ends and providing a sort of leadership to those that followed.  People kept shouting things like “On On”, which is hash-speak for “Follow me – the trail goes this way!” or something like that.

There was a lot of camaraderie and laughter as we stopped at gathering points to ensure that we hadn’t lost anybody.  As we progressed somebody eventually called out “NB” which stands for Near Beer.  The next stop was an actual Beer Stop where we all got to enjoy a can of beer or cider – especially brewed for this group at a local You Brew.

Finally we all gathered in a circle where one of the group suddenly appeared wearing a robe and a pointed hat.  I was informed that he was our “Religious Advisor” and it was his job to hand out punishments for infractions incurred along the route.  In each case, the culprit was required to drink a portion of beer as the group sang beer drinking songs.  Any beer left over was required to be poured over the culprits head.

I also learned that each member of the group gets appointed a new name – generally politically incorrect and often a bit off colour.  When all was over we gathered at a local pub for beer, food and a lot of laughter.

The Hash House Harriers originated in Malaysia in 1938 with chapters now formed in most cities and countries worldwide.   The name originated from the Hash House Restaurant that served, not hashish but corned beef hash.  The term hashing has since been used to describe the activity.

Wikipedia provides a great description of the history, constitution and language of hashing.

So, if you’d like to try a new activity that’s both athletic and social and you don’t mind a bit of politically incorrect and off-colour humour, Google the Hash House Harriers in your city.