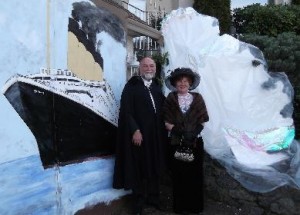 Amazing Mural of the Titanic

Every once in a while there is an event that we know will stay with us in long-term memory as a very special night. And while it seemed a bit wrong to be attending a party that re-enacted the hours before such a tragic event, the Titanic Party that I attended was one of those nights.

Everyone that attended knows that our friend who played hostess is an amazing party planner but I don’t think anybody was prepared for the large mural of the Titanic and several shimmering icebergs that adorned the garage as we approached her home.   She had spent most of the day painting the mural, the final step in months of planning and preparation.  Both she and her husband proved to be amazing hosts for this unique event held on the 100th anniversary of the tragedy. 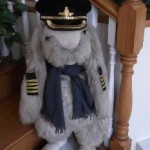 Captain Smith Welcomes everyone to dinner

As guests arrived in full costume from 1912, we were greeted first by Captain Smith and then by champagne and canapés – the beginning of a 7 course meal that replicated the one served at the Captain’s Table on board the Titanic on that fateful night on April 15, 1912.  A team of 4 amazing women prepared and cooked all 7 courses right before our eyes.

Throughout the night, guests discussed the lives of those passengers they had chosen to represent, adding a special poignancy to the story that came alive to us as we re-enacted those last hours prior to hitting the iceberg that quickly destroyed the myth of the ship that would never sink.  Conversation frequently switched between our fascination with the splendour and opulence of the era, to the lives of the various passengers and the terrible tragedy that took so many lives.  It’s not often that a social event evokes such an array of emotions and ranging from celebration to sombre 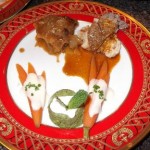 Unlike the 1500 people who lost their lives aboard the Titanic we were able to complete the courses served at the Captain’s Table and end the evening basking in the glow of fun, friendship and a little wine.   This was truly a night to remember.