Recently we got the chance to speak with composer Stephen Barton about his work in the film and game industry. Stephen has recently worked on the score for the impressive looking game TitanFall and was kind enough to talk about the experience with us. The full interview will appear in our Feb 2014 magazine issue but we are posting selections from the interview now.

How does scoring a game compare and differ with that of a movie or television show and which do you prefer?
The actual composing of music for them is really much the same – the differences are more in the process and in the structure. With a movie in particular (unless something goes very badly wrong, which has happened on occasion) you know in essence what the film will look like, what the story arc is going to be, what scene will come where, and where the ebb and flow of the music should go. The soundtracks for games always seem to come together in a much more evolutionary way. You experiment with different textures and levels of intensity and the benchmark is trying those out in game, which is where the Respawn guys are excellent guides – when you have a team of developers with such a clear vision and drive, it’s a great process.

What were some of the biggest challenges you faced scoring Titanfall and what have been your greatest triumphs?
Biggest challenge – finding the themes, the signature sounds. That’s always the hardest part. The greatest triumphs would have to be a large symphony orchestra in Abbey Road bringing the organic parts of the score to life and hearing the final mix in game. Even after forty or so projects, hearing it brought to life, then finished and working away in context is always a real pleasure that never really diminishes.

How many hours of music did you compose for the game and how much made it into the final build? 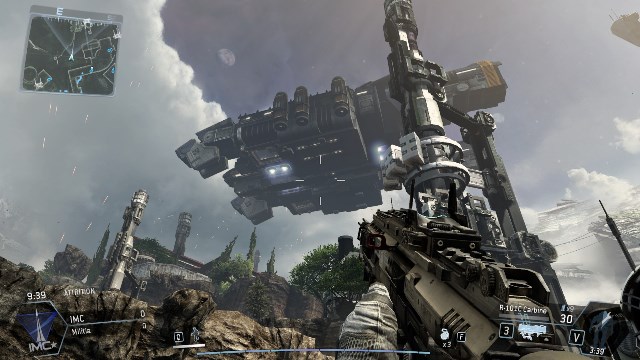 There’s just under 2 hours of music in the final game – but with alternate versions, passes that didn’t make it into the game, cues that hit the cutting room floor, I’d imagine there must be about 3 hours, maybe more. There’s lots of pieces we went through numerous tiny tweaks on, so in some ways it’s hard to say for sure!

When scoring the game, how much lead time did you have and were graphics and animation made available early in the process?
I spent about eight months on the game total. I’d have little Quicktime movies of certain sequences, but because the game is all multiplayer and you never really get the same outcomes twice, the team would make me three or four minute long example “gameplay videos”, which I’d have on loop on a screen in the studio whilst writing. The lighting in particular in Titanfall is very evocative and the visuals were a big inspiration and guide to the tone of the music.

As a follow up, how much did the score change if any as I am guessing the look and feel of the game continued to change and evolve during production.
The basic ideas didn’t change too much – we had the concept for two signature sounds, one for the IMC and one for the Militia. It was more a process of distillation, trying to focus things down to the very core of what we were after. I suppose it’s a little like making whisky! Particularly on the IMC side, Steve Fukuda and Erik Kraber (director and audio lead on the game) came up with this description of a “fuzzy wall of distortion”. We wanted to find a sound that sounded like it couldn’t be contained – a big, synthetic, distorted tone or instrumentation that had an edge to it.

Crucially though, we weren’t after a typical guitar amp or pedal kind of distortion, which is often grittier, but more of a fuzzy kind of tone which when you sit it back with other things gives you this feeling of weight, power and an uncontainable force. We went through quite a number of ideas of how to achieve that before finding the tone, which turned out to be a combination of analog synthetic elements and a larger orchestral ensemble, where you don’t hear the definition so much of the individual instruments, which seemed fitting to represent a huge corporation where conformity and perfection through technology is the watchword. 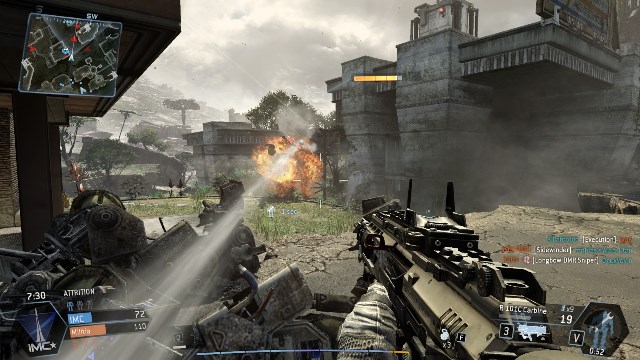 What can you tell us about the game and where you drew your inspirations when scoring the game?
It’s an immensely fast, kinetic experience that for me is quite different to the world of Call of Duty or any other FPS. I’ve found when I’ve played it that if you play it using those old tried and tested strategies you’ll generally get killed quickly! It’s much more 3-dimensional, much faster, and the differences between the Titans and their Pilots mean you have to think quite differently about how you play. There’s been a few times where I’ve been on the ground floor of a building and seen an enemy Titan walk past, and there’s almost this Jurassic Park, T-Rex moment of “I hope they don’t see me”.

As to inspiration – there were lots of little ideas that informed aspects of the score – usually techniques that I hear that I think I can put a new spin on – but the vision the guys had for what they wanted was really clear. Mostly it was experimentation, playing around with the concepts and seeing what combinations best fit.

How much leeway did you have with the creation of the score or did EA and the game producers give you the framework that you had to work in or was it more of a collaboration?
It’s entirely collaborative – I’d have briefs and a list of possible modules, but that was always in flux. I’d write for a couple of days and then send over the work in progress tracks to Respawn, they’d drop them into the game and we’d talk about how they were working, what was effective, what was less effective – and gradually hone down each cue until it was ready to record.