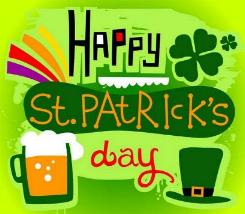 As a little Irish Colleen growing up in Ireland, here’s some of the things I remember and was told about St Patrick’s Day; wearing green, pining some shamrock “the real stuff” to our jackets, painting our cheeks, heading out as a family to watch the “St Patrick’s Day parade,” having fun making noise (but not me, I’m a good girl NOT). After the parade we couldn’t wait to get home for that yummy Irish Stew. You could smell it as soon as you walked in the house and of course those green cupcakes for dessert. Mum made the best. Oh and watching the Darby O’Gill and the little people movie. (got to say that banshee was always scary)

Now living in British Columbia Canada, everywhere you look as we approach St Patrick’s Day you see green. “Wear your green and be Irish for a day.” It’s great. So why green? Well, green is associated with St. Patrick’s Day because it is the color of spring, Ireland and the shamrock. Ever asked why is the shamrock the national flower of Ireland? The reason we were told was that St. Patrick used the shamrock, which resembles a three-leafed clover, as a metaphor to explain the Christian concept of God (Father, Son and Holy Spirit).

Growing up we were told that St. Patrick drove the snakes from Ireland (which I’m good with). It is true there are no snakes in Ireland, at least not that I ever saw, thankfully. There probably never was.  Some say that snakes are not indigenous to Ireland but we’ll give St. Patrick the credit for chasing them away.  So, why is it celebrated on March 17th? One theory that we were told, is that St. Patrick died on that day in Saul in 461 and was buried in Downpatrick , Ireland.

Getting back to why we celebrate St Patrick’s Day. As the Irish spread out around the world (friendly bunch) they took with them their history and stories. How St. Patrick’s Day is a very big deal and should be celebrated with parades, wearing of the green, music and songs, Irish food and drink, green beer. What can we say the Irish, like and know how to party!

Leprechauns and four leaf clovers are also associated with St. Patrick’s Day, if you manage to find one, you could be the luckiest person alive. But watch out for those leprechauns they can be more trouble than their worth, they are smart, devious and wouldn’t think twice about turning you into a frog to escape, (that’s why we have duckies as our mascot for Accent Inns, their friendly).

So remember to wear your green on Monday March 17th and be Irish for a day, and party!