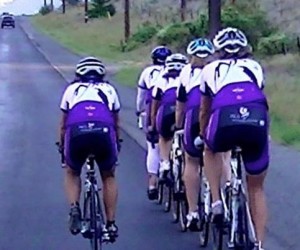 Below is a very special letter written by Neil McComb . This revolves around the ALS Cycle of Hope event, Kelowna section, and the fundraising efforts that have gone on. Have a read and you’ll see why we asked if we could share this with the world. This is a story of caring, of support, of respect and determination.” If you try your hardest, you can do anything!” If you’re not inspired after reading and listening….

I wanted to take this opportunity to thank everyone for their generous donations. I also wanted to share our experience from the event. I appreciate every dollar you donated as I know everyone works hard for their money and there are countless charities you can donate to. This is a long summary, but given the amount you have generously donated, you deserve to hear about the day and where the money is going….and again that it is very much appreciated.

We made our way up to Kelowna Saturday morning….convoy style. Scott rented a UHaul trailer for all of our bikes. I learned that towing a trailer didn’t slow him down at all….even when climbing the Coquihalla mountain pass! We arrived in Kelowna and went for lunch with the entire McComb clan. At 6:00 pm we attended the pre-ride meeting at Fresh Air Concept/Experience bike store in Kelowna. We all wore our Team Triple S (Scott, Sandra and Samantha) jerseys. As we arrived we had several comments from others about how great the jerseys looked. Many thanks to CKNW and SierraSil for sponsoring and paying for the jerseys.  We looked like swarming red and white bees.

Cindy Lister, the organizer and founder of ‘The Cycle of Hope’, was there to greet us as we rolled in. She lost her father to ASL a few years ago and is extremely passionate about raising awareness of this sinister disease and finding a cure. She gave a very emotional speech to all that attended and had most of us (me for sure) in tears. The prognosis for anyone with ALS is a slow and painful death. It was difficult to hear this and I can’t imagine how my brother felt listening to this message. I know he is aware of this but its still hard to hear. Robin Farrell, from 107.3 KOOL FM in Victoria, then addressed the group and lightened things up a bit. She is part of the Cycle of Hope team that was riding from Kamloops to Keremeos….over 600km. She introduced the ten member team of which half have been personally affected by ALS. Very inspiring group of people.

Carter was awarded the prize for top fundraiser with $5,000 in pledges at the time of the ride. For that we owe all of you who sponsored him a HUGE THANK YOU!!! He won a pair of Canuck tickets and two nights stay at the Accent Inn. As the speeches were ending Carter asked if he could speak to the group. He got up in front of fifty adults ….I was floored. He is usually quite shy and reserved. He told everyone that no matter what don’t give up…..now everyone was tearing up…..except for me……. I was full on crying. I had never been so proud of him.

Sunday was the day of the ride. We got the kids out of bed at 6:15am, had breakfast as a group and headed out for the ride. The ride started out pretty flat with a nice ride along the lake. Larsen (my other son) was on the back of my bike handing out candy…..all was good.  Then the flatness ended!!!!!! For the next 10 km we were in the hills of Kelowna’s lakeshore. I wasn’t expecting this and most of Carter’s training was on the flats of Pitt Meadows. He toughed it out and some of the climbs were down right steep….especially for an 8 year old on a mountain bike with knobby tires and only six gears. No complaints though. We got to the half way point and everyone looked OK. I asked Carter how he was doing and he said “Good”. I said, “We are half way” and he said, “Oh, I though we were done and the truck was taking us back”. I now knew we were in a bit of trouble. It was getting hotter and he was getting tired. I said “Are you going to be OK?” and he said “Yeah, I can do it”….second moment of complete proudness!!!

We headed back with the gang and grinded away on the hills. On a couple of the big climbs he had to get off and walk the bike up the hills….mind you so did some of the other adults. On one hill he got back on the bike and powered past a few adults walking their bikes up……third moment of complete proudness!!!!

We rolled back to the flats and cruised into the finish area. Uncle Scott was by his side until the final kilometre when he decided to sprint to the finish to beat me and my sister, Karen…..yes even in a charity ride there is sibling rivalry!!!!!  Of course I had to pursue and so did my sister. I backed off to finish the ride with Carter and glad I did as my brother crashed at the finish trying to catch Karen….yes its true!!! Carter pushed through with me and Shannon right behind him….fourth moment of complete proudness!!! Big hugs all around and time to eat, drink and relax!!!

In the post ride ceremony Cindy again gave a very moving speech. She made Scott and Carter honorary members of the Cycle of Hope team and they were given jerseys….yes, the tears flowed again. The message is clear…with no research there is no hope only a certain painful death. Here is the good news…..Dr. Neil Cashman (clinical neurologist and neuroscientist at the brian research centre at UBC) is confident they are 3-5 years from finding a drug that will stop ALS and Alzheimer’s in its path. It won’t reverse it but it will block it from progressing. My father and brother met with Dr. Cashman and asked him how much this would cost thinking it would be hundreds of millions of dollars. The answer he gave was eight million dollars. Eight million dollars to end a terrible disease in ALS and Alzheimer’s which is not as fatal but basically takes away a persons ability to have social contact with love ones. Eight million dollars…..how much is Roberto Luongo making this year? How much does it cost to build the bike lanes in Vancouver? Is it not worth eight million dollars to save the lives of people living with ALS???? In Canada there are approximately 3,000 people living with ALS…..again, it is eight million dollars to save 3,000 people!!!!

Team Triple S is not stopping here! We raised over $16,000 this year in the ride….yes, not even close to 8 million, but we need to start somewhere. As a group, we have decided to invite as many friends and family to join us in the ride next year…….bring your kids, friends, etc. Kelowna is a great summer destination. The more people we have involved the better….there is strength in numbers and no one can do it alone! Our team goal next year is $30,000. I hope that you can be a part of the ride or generously donate again like you did this year.

Below is a picture of Scott and Carter after the ride with their finishing medals and honorary Cycle of Hope jerseys….Scott’s didn’t quite fit!!!

The “video” is actually an audio interview between  Robin Farrell interviewing Carter throughout the ride. It was amazing to see him pushing himself along.