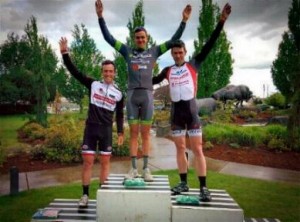 Greg Christian write up on Tour of Enumclaw.

The Accent Inns/Russ Hays p/b Scotiabank squad headed down to Enumclaw, WA this past weekend for the 19th Annual Mutual of Enumclaw Stage Race. Here’s a recap of the Elite Men’s squad weekend racing activities:

Stage 1: The weekend started off with a time trial on the traditional 10 km course, with a special twist for 2014: the organizers only allowed stock bikes, no specialized TT rigs. Greg Christian, perhaps extra motivated by the lack of TT bikes, put in the fastest time for the team, finishing in 4th place only nine seconds out of first. Other top placing’s included Jordan Cheyne, three seconds back from Greg, and Dylan Davies, fifteen seconds back.

Stage 2: The second stage was an eight-corner criterium in downtown Enumclaw. Traditionally, this stage has factored heavily in the overall GC, both as a result of breakaways gaining time on the pack and time bonus sprints. The plan was to be aggressive and try to get one of the GC leaders in a breakaway, while also winning as many time bonus sprints as possible. With two former winners of the criterium (Greg – 2012, Jeff – 2011) and a number of strong sprinters, we were also keen on going for a stage win.

Around three laps in, Greg followed an attack from Garrett McLeod (H&R Block), who was only three seconds back on the GC. This ended up forming a strong breakaway including two Trek/Red Truck riders (Baily McKnight and Dustin Andrews) and Carson Miller from Jamis/Hagens Bergman. The breakaway quickly established a 30+ second gap which it held until the end. Greg made numerous attacks in the closing laps to try and get away solo, but in the end the race came down to a five-way sprint. Greg attacked going into the final chicane but was not able to shake Garrett who came around in the closing meters to take the win, with Greg finishing second. The combination of bonus seconds from his win plus intermediate time bonus sprints put Garrett in the yellow jersey, with Greg close behind at six seconds back.

Stage 3: Going into the final road race, the team decided to lay everything out on the road and throw everything possible at H&R block to try to isolate Garrett and vault Greg into the lead. The road race is held on a difficult course, including a steep climb up Mud Mountain and exposed crosswind sections. It also includes a fast highway descent which often serves to neutralize and time gained on the climb, making it a difficult but often not too selective race.

From the beginning, the team was very aggressive with constant attacks and counter-attacks from the Cody, Jeff and Dylan. Dylan in particular deserves the team workhorse of the day award for attacking something like 20 times throughout the race. Climber extraordinaire Jordan Cheyne led up the Mud Mountain climb, setting a brutal pace than only few riders could hang onto. Late in the race, Dylan got into a breakaway which had the possibility to result in him taking over the GC lead. However, a strong chase effort by H&R block brought things back together before the final trip up Mud Mtn. Coming into the finish, there was a fairly large front group of 20-30 riders, including all of the GC contenders. At this point it was still possible to win the overall on time bonuses if Greg won the stage and Garrett finished outside of the top three. The team put together a solid lead out for Greg but he wasn’t able to accelerate with the true sprinters coming out of the last corner. Garrett ended up winning the stage and took a well-deserved GC victory, with Greg holding onto his second place.