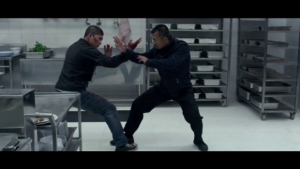 In 2011, and independent action film from Indonesia arrived with little to no fanfare and soon became an international sensation.  From writer-director Gareth Evans, and featuring a cast of unknown performers, “The Raid” set new standards for cop dramas.  From the dark and dangerous criminal underworld in which the film takes place to the brutal and jaw-dropping highly choreographed fight scenes the film was hard to ignore.

Thanks in large part to DVD, the film gained a larger audience thanks to word-of-mouth and now the second in a planned trilogy has been released which ups the action to new levels of hyper connectivity and ultraviolent action.

The Raid 2: Berendal” takes place shortly after the events the first film where officer Rama (Iko Uwais), learns that his exploits in surviving the first film have only increased the danger facing him and his family as the corruption he exposed has made him a target with much more dangerous criminals higher up the food chain.  Although he barely survived the events of the first film, Rama agrees to go undercover in a brutal prison in order to keep his family safe and get close to a key individual whose father is one of the biggest crime lords in the region.

His amazing combat skills are tested early and often in prison yet Rama is able to achieve this objective and becomes trusted associate in the crime syndicate following his release thanks to the contacts he made during his incarceration.

Unfortunately for Rama a power struggle is enfolding between son and father as the ambitious son is eager to take a larger slice of his father’s empire even if it means declaring war on the rival families.  The film spends a good part of its first hour introducing the characters and setting the tables for the final hour as it intersperses a few fast and brutal fight sequences between.

The final 45 min. the film are essentially one extended fight scene after another that is utterly captivating to watch and despite it’s at times graphic brutality, impossible to look away from.  Like the previous film, the speed, precision, originality, and choreography of the fight sequences are truly unique and have set new standards for martial arts films to follow.

While the film is presented in the native Indonesian language with English subtitles, it is very easy to get drawn into the dark and deadly world in which the characters find themselves.  Uwais proves that he’s more than just a skilled screen fighter as he infuses Rama with the complexity of the man driven by duty yet utterly devoted to keeping his wife and newborn son safe even when the cost puts him in constant danger and forces him to be away from them for long periods of time.

Evans keeps the action flowing and time and time again aside from the clever way that he introduces what would only be disposal characters by giving them unique and at times charming quirks and characteristics, produces action sequences that leave you wondering how they were able to film them and what kind of person would think up such sequences.  My wife commented to me that her blood pressure my surely have been rising from the relentless pacing and nonstop action and tension of the film and the constant barrage of action scenes that while brutal never become repetitive or gratuitous.

The film will not be for everyone as the action is quite brutal and times graphic however the free-form choreography that made the original so memorable has been taken to new levels in the sequel which keeps the action fresh as much as the story and characters keep you riveted during the non-action segments of the film .

All I could say the film is not one for the masses I can easily say this is one of the more enjoyable and better films of the year to date and is one that should not be missed especially if you’re a fan of police dramas or action films.

« The Passing of a Hotel
What’s Mother’s Day Mean To You? »