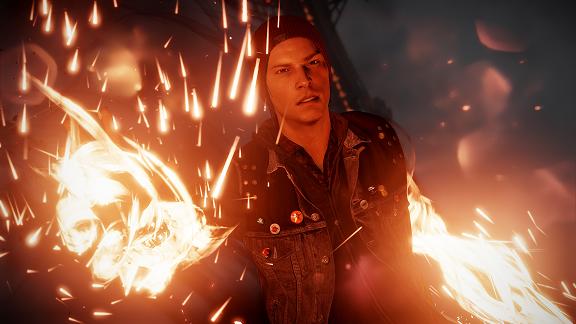 Recently I got the chance to have some up close and hands on time with the pending PlayStation 4 exclusive Infamous: Second Son. During our coverage of the 2014 Consumer Electronics Show in Las Vegas, Sony had a massive exhibit space that featured everything from UHD Televisions to wearable tech and of course the PlayStation 4. The game is the third in the Infamous series and follows a new character named Deslin who is a graffiti artist in Seattle.

The city is under the crushing control of the Department of Unified Protection, or DUP and when his powers become active, Deslin must battle the DUP to restore freedom to the city.

I started my demo by walking to a transit gate where the staffer on hand told me to use the touchpad on the Dualshock 4 to activate the scanner. Once I did this, alarms went off as Deslin had been identified and this brought a flood of shock troops into the streets.  Since the game is an open-world setting I was free to move about the area and when taking damage, could hide behind objects in order to recharge. This was a very good thing as the enemy A.I. was sharp and they were able to shoot accurately and from multiple angles and would often setup cross fire opportunities to pen me in.

The graphics were amazingly sharp and the speed of the game was blazing fast and smooth. So much so that I had to adjust to the camera angles at times as while trying to avoid enemy fire or take cover had me needing to re-orientate myself at times. I was also able to flame glide over distances which helped me get away from trouble and strafe my enemies and scale buildings.  Blasting energy bolts allowed me to take down enemies, but no matter how many I blasted more kept on coming I took down some enemy towers, the first time crushing myself in the process as this helped limit the field of fire as I learned quickly to take out the troops who had elevated firing angles.

Bolts were not the only weapon at my disposal as I was able to incorporate a chain as my melee weapon and this came in very handy when dealing with large groups of enemies in a confined space, especially when U had been blasting all those around me and needed a boost. I was also able to leach energy from my enemies which during a prolonged battle is essential.  When I was done with the seemingly ceaseless DUP troops I was instructed by the rep at the booth to take out a truck that was located in the middle of the map. This was done by blasting off panels and then blasting the glowing areas beneath them. The next step was to scale the truck and use the touchpad to extract a power unit. This was a bit tricky as you have to hold the unit just right or it will slide back into place, but once that was done, I was able to destroy the unit.

My victory was short lived as a massive DUP troop arrived geared out for battle. After a few exchanges with him, the rep told me of a move that had not been an option for me prior and upon doing so, Deslin soared into the air majestically and then returned to earth like a diver only with a devastating energy bomb which cleaned up the area and my enemy very nicely.

The graphics of the game are amazing as the facial animations alone are not only engaging but truly help define the character and give you a since of being immersed in the story.  The lighting and particle effects shine and with the fast and frantic gameplay, they combined to make a spectacular visual presentation that defines the power of the PlayStation 4 and sets the standard for the next generation games.

I look forward to the final game as based on what I have seen at PAX Prime and played at C.E.S., Infamous: Second Son is one of the best reasons I have seen for getting a PlayStation 4 for those who have not already done so.