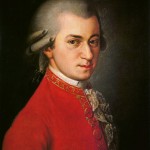 These are three that Mozart began but never finished. Two are Italian comedies, and the third a German romance. In just over a year, City Opera presents our reconstruction of these ‘lost’ fragments, now set in the 21st Century. The music is wondrous.

A producer is sitting in a darkened theatre, considering his next project. To his astonishment, the Gates of Limbo open before him. Out come spirits, souls who have been waiting 200 years for Mozart to finish his work. They beg the producer for a chance to be born, and to sing. They have been practicing – and squabbling — for two centuries. The producer agrees, but on one condition…

They have created a short video with fanciful images, narrative, and actual ‘lost’ music presented in our upcoming first comedy.

Thanks to engineer Jaap Hamburger at Orange Music Ltd, video editor Adam Abrams at Adam Abrams Design, and courtesy of Universal Music Canada and Classic Produktion Osnabrueck, you may now discover highlights from this wonderful music, linked and reconstructed by the new story they will tell.

Not from Vancouver but want to enjoy the great work done by City Opera Vancouver? Book a stay at the Accent Inn in Burnaby or our Vancouver Airport location in Richmond.

« 7 Tips for Travelling with Grandparents
Happy BC Pioneers Day! »