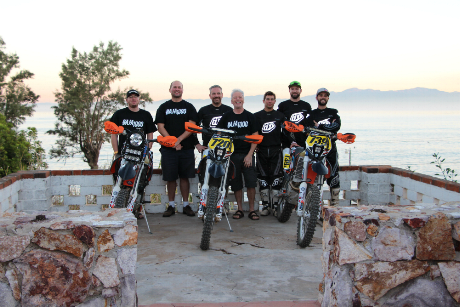 With pre running all complete and only a few days until race day, it was time to organize our plan.  All riders finished practicing their sections without injury, goal #1.  We would have 5 vehicles on race day chasing the 3 race bikes.  Each vehicle would have a spare bike on board that parts could be robbed off if needed.  Other items on board would include satellite phones, food, water, tools, first aid kits, a spare rider, etc.  Basically we would have 2 trucks servicing the bikes in the centre of the Baja peninsula and east coast.  The other 3 trucks would take care of the bikes down in the southern portion and on the west coast.

11:30pm on Thursday November 14th and the race starts for us.  Paul is on the bike for the first 70 miles after qualifying us for 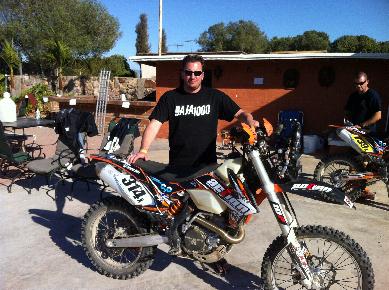 a good start position the day before.  His section goes cleanly and hands off to Jimmy.  Marc and Nick, both riding solo also come through the first check point in good shape.  Race mile 192 is the next place on the course where we can pit the bikes.  All bikes clear this pit fairly close together which is great.  The sun is close to coming up now and Henry gets on the relay bike to do his 100 mile section through some of the gnarliest sand whoops you will ever see.  40 miles of 3 foot deep holes basically.  Physically it doesn’t get much harder than this! 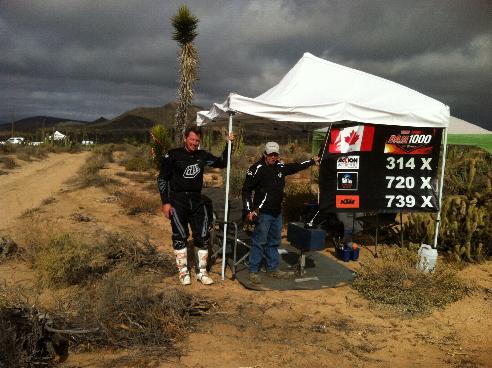 All 3 bikes are running well and coming towards me where I wait at race mile 390.  David is on the relay bike now, an inspiration to us all at 68 years old.  If I am in half the shape he is at that age, I will be more than happy!  David comes into the pit where I am at around 11:30am which is right around where we expected to be.  After counting bikes going by in our class we seem to be mid pack which is great for a bunch of guys that don’t ride in the desert at home!

The bike is in great shape when I get it.  Everything is working and we do some basic maintenance and I get on with my section.  Starts out great but then the rain falls.  No big deal, rain actually provides less dust and better traction.  Until the dust and rain mix and end up sticking to your googles and you can’t see at all.  Rip off the goggles and get on with it, rain pelleting in your face, squinting to see but better than the alternative.  I actually end up passing a bunch of guys at this point, probably because riding in the rain is just like riding at home in Victoria BC!

The middle part of my section is a giant silt bed, up to 3 feet deep in places and will literally swallow a bike if you don’t pick the right lines.  Crisscrossing the course in every direction I manage to stay out of trouble.  I have prerunning the section 3 times to thank for this.  The rest of my section goes without a hitch.  It’s a very cool feeling flying along, spectators lining the course in the middle of nowhere, cheering you on.  The pits that supply gas have 5 or 6 guys at your disposal cleaning your goggles, re-fueling, giving you gels to eat, etc.  The bike is working so well, no need to adjust anything.

Around 345pm, at race mile 525, I see my pit and a bunch of familiar faces.  What a great feeling to get the bike to my teammate in perfect condition and ahead of schedule.  We race around and do a major pit stop at this point changing wheels, air filters, etc.  Once again it goes smoothly and Mladen hops on the bike and heads for race mile 670 where we will chase to pit him again and get Paul on the bike.

Before that can happen, we need to pit Marc and Nick who are somewhere behind and have been on the bikes for 16 hours straight now.  Around 530pm Marc shows up.  He is doing awesome.  Service his bike, get him some food and he is on his way.  We get a call around the same time from Nick on his sat phone.  He is on the course around race mile 425.  The bike has stopped.  Looks like the silt beds got him as the motor will not turn over.  He is safe though and with a group of supporters.  He will not be able to get out until morning though ( after all race vehicles have gone through ).  We have no choice but to move onward and support the 2 bikes left in the race.  It’s starting to get dark now and the 800 horsepower trophy trucks are catching.  Every riders worst nightmare at the Baja 1000 as these things come up behind you fast and do not slow for anything.  Will our guys make it to the finish line before the trucks do…? 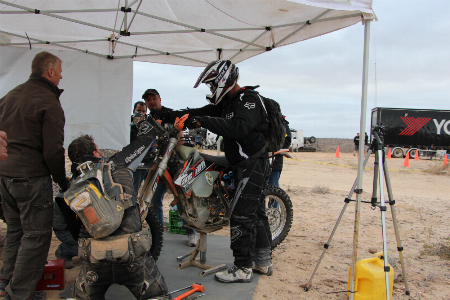 « After Aliens: Colonial Marines, Can Gamers Trust Sega With Alien: Isolation
Jurassic World vs Star Wars: Episode VII: Who Has More To Lose? »