Helping Elephants Through the Power of Film 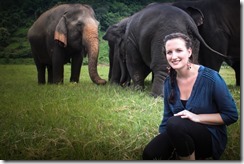 Ashley Melsted with the Elephants

Two years ago I met Patricia Sims, a Victoria-based filmmaker that has been investigating the critical issues facing elephants through her two documentaries. Intrigued by her discoveries, I learned that although there are many people working hard to protect these endangered animals, there are many more that know nothing about what is happening to them. I wanted to be part of changing this and so I began to work with her and her team to raise awareness through the power of film and the online community.

My background is in online marketing and social media. What I love about these forms of media is that it is now easier than ever to connect with those interested in your cause to bring people together to make a difference. In August 2012 Patricia completed the short film Return to the Forest, which is the first of her two elephant documentaries. We started our initiative for social media outreach for the release of the film and the cause by launching the first every World Elephant Day. We created a website, Facebook page, and Twitter account and started connecting with others that cared about elephants. It was a huge success! Major elephant organizations around the world came on board and shared about World Elephant Day with their social media networks. Major news outlets such as the New York Times, CTV News, and the Huffington Post recognized the day and wrote news stories. People across the world gained knowledge, shared with their friends, and were eager to learn how they could help.

Now we are taking our awareness initiative to the next level by communicating the plight of elephants through Patricia’s second documentary called Elephants Never Forget. Film is an emotional medium and allows you to go deeper into an issue than you can through text. It creates an experience for people, captures their attention longer, and encapsulates the issue into a story that people feel emotionally drawn into. We are now working hard to complete Elephants Never Forget to bring the critical plight of elephants to audiences worldwide. We are currently fund-raising for its completion through Indiegogo, an online crowdfunding platform. If you are interested in learning more please check out our Campaign. It’s going to be a challenge to get to our goal but we’re hoping with a bunch of small donations we’ll get there.

From the editor: Part of Accent Inns InnAid program has been to support Arts & Culture in our communities. We have supported several local filmakers or productions over the years, so when Ashley, a fellow local social media enthusiast, approached me with this post, I was more than pleased to place it in our community line-up.