The Elder Scrolls Online: My Thoughts On The Game To Date 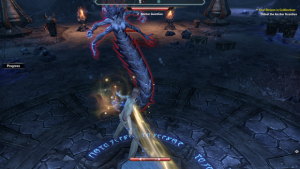 This June will mark my fourth E3 since we moved terrors on its own but our second office.  During my second E3 after the move, Bethesda had a closed-door presentation of their next entry into the phenomenally popular Elder Scrolls series.

Considering that the previous year they had shown off Skyrim prior to its launch, the idea of a massive online version of the fantasy series certainly raised a lot of expectations as well as questions. The game is now released and after spending several hours in the beta as well as several hours with the launch version of the game I’m giving my overview of the game in its current state.

Players can start off by picking their race and gender as well as the classes of Dragon Knight, Sorcerer, Nightblade, or Templar.  Each one has their own unique strengths and weaknesses and in the open-ended and highly customizable nature the game, countless weapons, items, and attire at their disposal.

One starting the game and moving through an introductory area that also helps players refine the basic points of navigation, inventory management, and combat players embark into a much larger adventure.  Aside from countless side quests the game offers several quests with branching storylines and the actions and achievements of the players in said storylines can help alter the world in which you play.

Players are free to venture out on their own working band together with other players who unlike many other massive online games I found to be extremely friendly and helpful to players of all skill levels.  The gaming locales are beautifully rendered and vast as you can easily spend several days just wandering around one low cow exploring the detail and diversity of the land.

Like any other massive online game a good deal of time is needed to play it as not only as there are quite a bit of journeying needed for each mission but random events and the previously mentioned side quests pop up constantly.

Players also have the ability to craft, cook, trade items that they find along the way or salvage, and this can be done through interaction with both human and A.I. Characters.

The combat in the game can at times devolved into little more than button clicking but it is nice to be able to do ploy is shield to block an attack and counterattack with your weapon.  I found that I was able to do quite well on my own up until certain in mission bosses that often required a little bit of assistance or patients in order to bring down.

The landscape of the game is indeed vast and you will need a lot of time in which to play it.  It is very easy to sit down at the game for which you think will be a couple of hours and find that several hours have passed speedily due to the engaging nature of the game.

That being said while enjoyable to this point it has not hooked me to the point where I have an overwhelming compulsion to keep returning to play the game.  This is not to say that I do not have fun while I am playing it is simply to say that I do not currently feel the burning necessity to jump back in and continue my quest with every free gaming moment that I have.

The game comes with 30 days of free access however players must enter a subscription payment or show that they have a prepaid code in order to continue access.  With a $14.99 a month subscription model I am curious to see how many people will continue to pay to play after the first 90 to 180 days after the launch of the game.

There is certainly plenty to do and the developers have created a very beautiful and rich world filled with things to fight, places to go, and versatility to allow players to add their own customizations.

My biggest concern is that in the wake of previous massive online games is there enough new and different content and gameplay to engage the more casual online gamers and to keep the often fickle hard-core gamers in place.  Bethesda is to be commended for what to me has been a very stable and successful launch as I have had little problem getting into the game and have not found any real technical issues with the game.

I’m curious to see what the future will hold but for now I strongly recommend that if you are a fan of the series and/or massive online games you will find the game entertaining enough as long as you temper your expectations and realize that this is not going to be Skyrim with a massive online component but rather a massive online game that is set in the Elder Scrolls Universe.