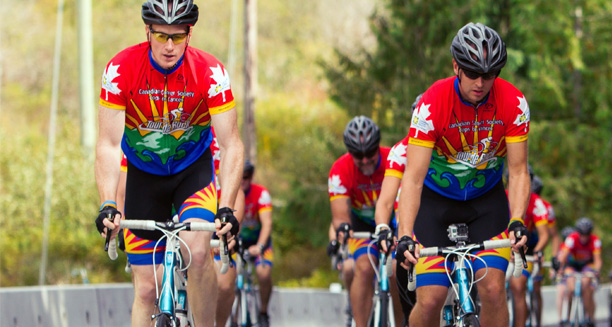 Last year while travelling Vancouver Island my wife and I came across the Cops for Cancer Tour de Rock bike team twice, initially in Ucluelet and then again on the highway south of Parksville.

In Ucluelet they were gathered at the marina preparing to leave for Tofino; the group’s energy was palpable – there was much laughter, back slapping and general excitement and you would never have guessed that the previous day they had ridden more than 100 kilometres from Port Alberni. Unfortunately disaster awaited them, on the way to Tofino there was a collision between a couple of the riders and two were hurt, both required medical attention. The Tour de Rock is no ride in the park, it’s a gruelling, 1,000 kilometre, two-week trial of endurance.

In 2014 these dedicated officers, along with a media rider and support staff, raised $1,154,776 – no mean feat. Since 1998, when the event first started, over $20 million has been raised for the Canadian Cancer Society. The money is used to fund paediatric cancer research and programs which help children with cancer and their families.

I was pleased therefore to discover that Accent Inns donates rooms to the team when they are in Victoria, and also works with the organization in Vancouver. I know Accent Inns, along with every team member, is proud to support this wonderful cause as part of its commitment to the communities it serves.

This year the riders will set off on September 20th on the first leg of the ride from Port Alice to Port Hardy and Port McNeil, a gruelling 97 kilometres. We wish them clear skies, safe riding, a wonderful sense of camaraderie, a wealth of amazing memories and the knowledge that their selfless determination will continue to positively affect many lives long after the bruises and blisters have disappeared.