Camosun Chargers Golfers Are Back At It Under the guidance of Coach John Randle, the Camosun College Chargers, who went to the nationals last season, had a great finish at the first tournament of 2011. Coach Randle obviously takes his experience as a Canadian PGA professional and owner of the  Randle Golf school in Victoria, and applies it to the Chargers program.  It’s very apparent that blessed with some very talented players and one of the best coaches anywhere, we can expect the Chargers to be well represented moving forward.

A great example of this is Jared Hundza, Camosun recruit,  claiming the low total at PacWest Tournament #1. Despite his status as a first-year student-athlete at Camosun, the UBC transfer student quickly claimed the top spot on the Leaderboard as the newly-named PACWEST hit the links to begin the 2011 golf season.

A graduate of Pacific Christian School in Victoria BC, Hundza played a year of eligibility with the UBC Thunderbirds before transferring to Camosun where he is currently enrolled in the Business Administration program.  Hundza shot a lean two-day total of 139 (68 + 71) which made him the top individual golfer of the first sanctioned tournament of the 2011 season 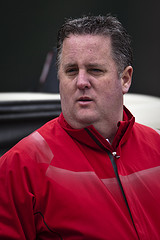 Chargers Phil Kondrak (St. Andrew’s) and Jordan Krulicki (Red Deer, AB) who are also entering their fifth-year ofeligibility shot 147 and 151 respectively while Camosun newcomer Brady Stead (Vernon) finished with 153. At the end of the two-day tournament hosted by Thompson Rivers University, UFV came ahead in first place with a total of 574.  Camosun finished six strokes back in second while Capilano University placed third with 587 .

Accent Inns, the Victoria BC Hotel chain is thrilled to once again be a sponsor of the Camosun College Chargers athletic program.