Top 4 reasons you must try a float plane ride 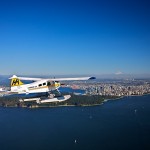 Although I’ve lived in Victoria all my life,  I’ve never had occasion to fly with Harbour Air to Vancouver before. Well I finally made the trip from Victoria’s beautiful inner harbour over to Vancouver’s, landing right in front of Canada Place and Stanley park.

1. The take-off and landing themselves are incredible. These planes can shoot up into the sky at a moment’s notice or land on a tiny piece of water, making them ideal for flights into harbours, inlets and small lakes.

2. Now I thoroughly enjoy the many trips I’ve taken on the Coho over to Port Angeles or the BC Ferries to Vancouver and the Sunshine Coast –  but the visuals of flying over two of the most beautiful harbours in the world (yes I’m biased), the Gulf Islands and Fraser River delta cannot be described – it must be experienced. The day I flew, the weather was clear, the sky blue and the ocean flat. I was treated to postcard views of the Washington State Olympic Mountains, the massive extinct volcano which is  Mt. Baker and the glory of the North Shore Mountains as they tower over and act like the Protectors of downtown Vancouver BC. Even the great Disney cruise ship that was in port seemed like something a child could play with until we landed.

“Some things in life should not be passed over”

3. The service was quick,  which is exactly what I required on this occasion, but the trip had sort of a slow motion feeling about it as the pilot gently turned the aircraft and exposed yet another view of my beloved BC Coast.  As you can imagine,  I was like a child with my face pinned against the window. At one point I looked around to see other business people working during the flight, but the feeling of guilt was fleeting as I returned to resting my head upon the glass gazing at the sights that were before me. Some things in life should not be passed over and how can we appreciate our circumstances if we don’t take time to enjoy and experience our surroundings….yes I worked a little later that night to make up for it…. 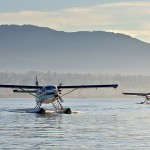 Float planes can take off and land in small spaces 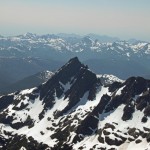 A few years ago I also had the opportunity to fly over central Vancouver Island on my way to an extraordinary fishing adventure. That time it was with our good friends at SeaAir. Once again I can’t tell you how it felt to look down on the mountains, lakes and trails that I have hiked so many times before. The feeling that you could reach out and touch the mountains is almost spiritual (heh, I like mountains..OK). Both my Downtown to Downtown and my overland experience really showed me the special place that float plane travel has in the scenic realm.

4. I would compare flying in a float plane as opposed to commercial jet to that of paddling a kayak as opposed to riding onboard a cruiseship.  Float planes fly at much lower altitudes and speeds which really lets you see the geography. In my case you could see all the islands in fine details and follow the land as it slowly disappeared into the ocean. I viewed all kinds of seabirds flying below us and gathered on top of the water. Seals could be seen jumping out of the water pretending they were dolphins.  I know this all sounds so “perfect” or even computer generated but let me tell you the sights here on the coast of BC are just that incredible and a Harbour Air float plane ride is a spectacular option for viewing. 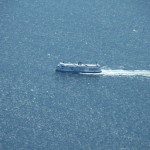 BC Ferry on the way to Vancouver

Not everyone has the opportunity to commute by float plane or use them for a business trip – but as you complete your bucket list,  make sure you put a float plane ride in BC near the top. Harbour Air and others offer fantastic air tours as well. I assure you it will be nothing like anything else on your list and an experience you will always remember.  That being said I am sitting here on a  BC ferry as I write this and yes, this too should be on your list as one of the most scenic things to do in North America!

« Camosun Chargers Golfers Are Back At It
Terry Farmer Tours Okanagan Wineries! »