Sign at Midway, where the Kettle Valley Railway started. Heading east from here was the Columbia & Western Railway. Both lines became part of the CPR and today form part of the Trans Canada Trail.

They aren’t visible from town, but up in the hills just eight kilometers south of downtown Kelowna BC’s cafes and bars along busy Bernard Street are the famed Myra Canyon trestles, an amazing part of Okanagan history still attracting thousands of people.

Walk or cycle these 13 wooden structures and be amazed at what railroaders did a century ago to stitch together the province of British Columbia. After it opened in 1915 the Kettle Valley Railway earned the nickname of McCulloch’s Wonder for chief engineer Andrew McCulloch. The KVR later became part of the Canadian Pacific Railway’s network of steel rails and paddlewheel ferries. Now it’s a rail trail stretching across the southern interior part of the province.

It’s an afternoon cycle from Kelowna up to Myra-Bellevue Provincial Park on the edge of town, which contains the trestles. But you can also make a trip of several days along the trail, either camping or staying at overnight accommodation. Chute Lake a few hours south of Kelowna has a rustic lakeside lodge. 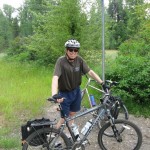 Ed Pietraszek of Victoria at Eholt, formerly a bustling railway stop between Greenwood and Grand Forks. It once claimed six hotels in its heyday.

Starting just south of the lake are three long switchbacks, a giant zigzag down the side of the mountain into Naramata. On the way, you’ll see a dozen piles of stones beside the trail. These are the rough-made bake ovens that camp cooks used to bake bread for the men who built the railway a century ago. It’s just over a two per cent grade going down to Naramata. Lucky for you, at the bottom are numerous wineries, even one right beside the trail.

By the time you peddle into Penticton, you will have dropped a thousand metres of elevation from the trestles. The trip from Kelowna is about 50 kilometres and can be done in a day. It’s a decent bike route, but not a paved trail like the Stanley Park seawall or the Galloping Goose in Victoria. Soft and sandy in some places with some big puddles after rainfall, it’s best ridden on a hybrid or mountain bike; don’t bring your skinny-tire road bike.

You can also ride east and south from Kelowna on the KVR trail, connecting the small communities of Beaverdell, Rock Creek, Midway, Greenwood, Grand Forks and at trails’ end, the city of Castlegar. (Although east of Midway, it’s actually the route of another old abandoned railway, the Columbia & Western.) 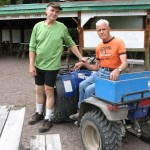 Norman Gidney with Paul Lautard, who created Cyclist’s Rest at Rhone along the KVR with a full-size replica of a CPR caboose that he built. Son of a railwayman, he grew up at nearby Carmi and used to ride the KVR to school.

A notable stop along the way is Cyclist’s Rest at Rhone, about 100 kilometers from   Kelowna. Retired construction worker Paul Lautard, a KVR employee’s son who used to take the train to school, created a fullsize replica of a CPR caboose of lumber and plywood. It’s a must-stop for his hospitality, including the fresh cold water from his well up the hill that he brings down on his ATV.

There’s a good blog and numerous photos about riding the trail from a group who came through in 2008, the year the trestles reopened after the terrible Kelowna fire of 2003, at  www.members.shaw.ca/bchalks/index.html

Also see the very good website kettlevalleyrailtrail.com with maps, travel tips, photos and detailed blogs from cyclists who rode the entire KVR from Midway to Penticton — about 220 kilometers — in 2011. A good piece of advice from those riders, “remember that the Kettle Valley Rail Trail, while well marked in some areas, can seem a bit remote at others.  It’s wise to have a general idea of your distances, times and direction before setting out on your trip.” 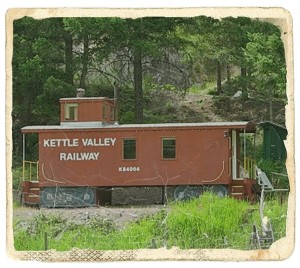 The replica caboose built by Paul Lautard alngside the KVR trail at his property in Rhone, near the Kettle River valley. 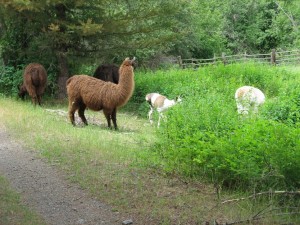 Exotic animals along the trail near Greenwood, in the West Kootenay.