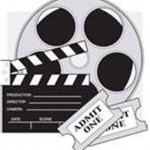 Being used to movies in high-definition with surround sound on a wide-screen, I wondered in advance if it would be possible to follow and enjoy a movie without sound or colour.

I saw the movie in a quaint old-fashioned theatre in Sidney BC, with a small screen and a poor viewing angle. The tall man in front of me blocked part of the screen and I did not think I would be able to follow the plot that was so dependent upon facial expressions and the occasional words spread across the screen.

I was totally wrong. Once I got used to the idea, it was easy to follow. The two main actors Jean Dujardin and Berenice Bejo are masters at facial expressions that easily convey their emotions and thoughts. The audience was almost able to almost hear them think!

The same was true of the third main character; a 10 year old Jack Russel Terrier named Uggie. After all dogs have had to use body language to communicate with humans for centuries!

Mid-way through the movie there was a small amount of sound that startled the entire audience. By then we were really into the silent format (with music). At the end when the actors spoke out loud for a few moments, we all seemed startled that they spoke with French accents. By then we had already imagined their voices in our heads.

This was a very clever movie in an unusual format. I don’t think I want to see a lot more silent movies as this was more of a novelty than a new style, but well worth attending.