This is a great re-post of the Chargers announcement.

Today, the Sport Information Resource Centre (SIRC) and the Canadian Collegiate Athletic Association (CCAA) announced the 2011-2012 SIRC-CCAA Academic All-Canadian Award recipients and among the 162 student-athletes from across the nation who have achieved combined excellence in collegiate athletics and academics are Jordan Elvedahl and Caitlin Marshall from the Camosun College Chargers basketball program.

The SIRC-CCAA Academic All-Canadian award is the CCAA’s most prestigious student-athlete honour, epitomizing both organizations’ commitment to academic success and athletic achievement.  To achieve this award, recipients must attain academic honours at their institution and be named to his/her respective conference All-Star team.
An exceptional point guard and leader, second-year Jordan Elvedahl (Stelly’s) was Top 3 in assists in the league and averaged over 12 points per game.  Having earned a PACWEST 2nd Team All-Star for his athletic achievements, Jordan also posted top grades in Camosun’s Centre for Sport and Exercise Education – Exercise and Wellness Program to receive the Academic All-Canadian award.

Playing out her fourth year of eligibility on the Chargers women’s basketball team, Caitlin Marshall from St. Albert (AB) was 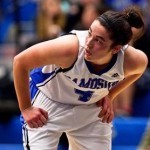 awarded a PACWEST 2nd Team All-Star for being one of the top perimeter shooters in the conference and among the Top 10 scoring leaders over the entire season.  Caitlin’s outstanding performance on the court was surpassed only by her ability to achieve excellence in the classroom where she earned one of the all-time highest GPA’s in Camosun’s Centre for Sport and Exercise Education – Bachelor of Athletic and Exercise Therapy Degree Program.

“To achieve excellence in both sport and academics requires tremendous skill, dedication and perseverance,” says Debra Gassewitz, SIRC president and CEO. “SIRC is honoured to recognize outstanding collegiate student-athletes who are passionate about excelling in their education.”
“The CCAA is committed to academic success and athletic achievement,” stated Sandra Murray-MacDonell, CCAA Executive Director. “We are very proud to recognize and celebrate those student-athletes who’ve attained the highest possible CCAA honour in their pursuit of academic and athletic excellence.”

« The Artist – movie review
WINE TOUR SUPPORTS THE BC SPCA »