C.E.S. in Las Vegas was the biggest and best showcase yet for all things technology. This was our third year covering the show and it continues to grow each year as it has sprawled beyond the massive convention center to also include convention space at the Venetian and several hotel suites across town where companies base themselves for private meetings.

Unlike most other trade shows and conventions, C.E.S. is home to everything from computer and console hardware and accessories to more innovative products which include medical products, audio technology, television, home appliances, vehicle tech, and much more. Simply put if it runs on batteries or electricity, you can bet there is a place for it at the show.

In the weeks leading up to the show, our inbox was flooded with press releases, meeting requests, and other inquiries which can be very overwhelming as there simply is not enough time to get to them all even with staff on hand to help. Often the simple logistics of having to get from the convention center to a hotel across town and back is daunting even with the free shuttle bus, monorail, and cab options that are available to us.

As such we booked our meetings as best as we were able and dropped in to see the other booths as our schedule allowed. Opening the show we stopped into Creative Labs and were greeted with a display of a new product that combines a wireless speaker with numerous functions such as a Karaoke and MP 3 player. I know the company best for their sound cards, but they showed off a great line of products in the speaker market that shows why they continue to be the leader in PC sound technology. 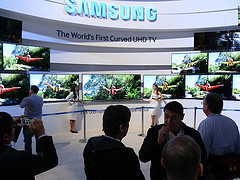 well as some amazing curved television technology that gives the best possible picture even to viewers who are seated to the side of the screen’s center. I was also very impressed with a new 3D television that did not require glasses to produce the 3D images.  My wife enjoyed their new line of home appliances such as a dishwasher that sprayed from the top down and a very impressive new refrigerator that allowed you to set the temperature for four different zones independent of one another and displayed the temperatures in the door via led that vanishes when not in use. The unit also gave users the option of regular or sparkling water for those wishing to make Sodastream beverages.

Other meetings followed such as Wicked Audio, Polaroid, Nikon, Piston PC, and countless others that would take several days to recap. Instead we will focus on the main points of technologies that really stood out to us.  Polaroid was impressive with their retro line of camera that produced pictures on paper but the sports cameras and tablets really stood out as they offered high-performance Android based units at an affordable price. They even had a line of tablets that was centered to younger users.

EVGA kindly hosted us at their suite at the Bellagio and with a panoramic view of the city before us; we saw the latest in video cards, power units, cases and more for the company.  The biggest new feature was the Torq X mouse as EVGA will be going into gaming controllers with the release of this product in March. The customizable unit can be adjusted with a screwdriver to change the weight, grip, and other factors to make it a fully unique and customizable control. Of course others will want to enjoy their other mouse options that will be coming out as well.

SteelSeries had a great presentation for us which were highlighted by their new Stratus gaming control and Sensei wireless mouse. The Stratus is a small gaming control which allows top function for all Ios based devices. For our demo, I played a jet ski racing game and was amazed are how responsive and sturdy the control was as it provided precise control of the game and gave me the flexibility of a wireless control. This would be ideal for users on planes, busses, trains and other forms of transportation as well as those looking to enhance their mobile gaming experience.

Next up was the Sensei Wireless which combines the sleek look and functionality of the Sensei line with a stylish recharge base that can be customized in a wide range of colors via internal lighting.  As a plus the unit can be connected via a USB recharge cable to function as a non-wired mouse for those who wish to stay productive and not worry about their charge status. 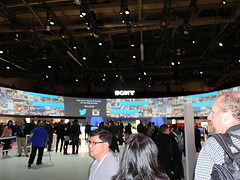 A visit to the Sony booth was also a highlight of our coverage as on top of the very impressive cameras, televisions, wearable tech and other electronic devices Sony had available, the ability to play the pending Infamous: Second Son was an unexpected bonus. The pending Playstation 4 exclusive has amazing action, graphics, and effects that showcased the amazing power and versatility of the Playstation 4.

Day two of the convention brought even more meetings and amazing items. One staffer had attended several of the panel presentations on the opening day of the show which allowed us to focus our time on the exhibition halls and private meetings. The press rooms in the convention center and Venetian were a welcome Oasis as refreshments, lunch, and wifi as well as computers were a welcome break during the long and busy days.

An early visit allowed us to experience the Steam Box controller up close and personal and we also got some time with the Piston PC which is a miniature computer that does not lack in power and function. Playing Half Life 2 on the system while trying out the Oculus VR headset was a challenge that took some getting used to for me due to the disorienting nature of playing in a virtual world. It was easy to become dizzy so I found that leaning against the podium worked best for me.

Razer hosted us for a look at their concept modular PC as well as a look at their new wearable tech. The bracelet like device is due later this year and offers various functions such as being able to instantly connect with a person’s social networks simply by shaking hands with them should they be wearing a similar device. I had wanted to see more of what they had to offer but the reps seemed rushed and eager to move on to other projects so we took our queue and left to visit the great offerings of Turtle Beach.  With an impressive line of headsets for gaming consoles and PC as well as universal devices, Turtle Beach met with us on two occasions at the show to show us their latest tech including some hands on time with the custom headset for the pending Titanfall game. The company also showed off their great devices for Ios and went over in great detail about how they have worked to provide a more dynamic sound experience by offering different channels for sounds that provide a richer and more immersive experience especially for gamers and audiophiles. 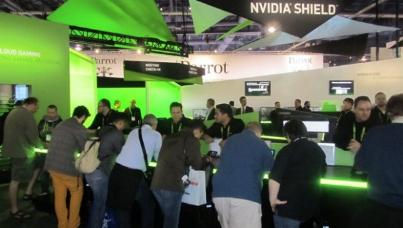 monitors soon. The new tech improves refresh rates and eliminates the lag, tearing, and visual distractions that hinder gaming experience. As impressive as this was, I loved the Shadowplay tech which allows users to capture images and video in game without any lag or glare. The ability is free to use for owners of a 6 series or higher NVIDIA graphics card and will be a huge boon for us as we will no longer need to setup a camera, record footage and worry about glare and lighting issues. The bonus is that this feature does not hinder gameplay in any way.

The final thing we experienced was the awesome NVIDIA Shield which allows gamers to play their games on the go in w Wifi enabled area. The example we were given was of a gamer looking to continue their game downstairs or outside. By connecting via Wifi, the Cloud based system which resembles a standard console control with a built in video screen allowed me to play a game of Borderlands 2 with no loss of graphics, speed, or gameplay. I am sure gamers who are sick with the flu or other seasonal issues will really appreciate this device.

There was so much more to experience and trying to summarize the countless things that we saw would fill a book, but suffice it to say with the massive amounts of options and expanding floor space, the show simply keeps getting better and better.
Garth von Kallenbach   Shewed & Reviewed