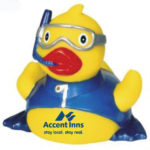 I have to say I love the Accent Inns ducks – they are super cool and always bring a smile to my face when I first enter my room at any Accent Inns. I noticed a comment on TripAdvisor the other day, where a traveller said, “I was very tired when I checked in, so the cozy bed was much appreciated. I loved the rubber ducky with the accent inns logo :).” That’s what it’s all about, a little fun, something to take the edge off our travel stress.

What I hadn’t realized until I started writing this post how many different little guys dressed in just about anything you can imagine there are hanging out in hotel rooms in Richmond, Burnaby, Victoria, Kelowna and Kamloops. I snorkeled around and came face to face or face to beak with a chef, a jazz dude duck, a biker and a cyclist, a lady duck in curlers, a skateboarder, a basketball player, a hockey player, a footballer, 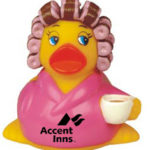 pirate and yes a fellow snorkeler and I do believe there’s more.

Apparently the rubber duck’s first role was as a chew toy – this was in the early days of the rubber industry in the late 1800s. Those ducks were solid dudes and as such sank. Not much fun in the bath methinks! But you could at least throw them at anyone who walked in on your bath time.

The rubber duck we know and love was sculptured by a Russian-American sculptor called Peter Ganine in 1949 – he was the guy that got the first patent and created the uncapsizable duck we know today. Word has it he sold 50 million of the little guys. 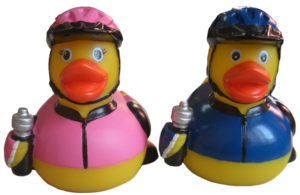 Since then these charming little characters have been used as hood ornaments for trucks, been featured in movies and immortalized in song especially by Ernie in Sesame Street!

Here’s a list of rubber ducks I’d like to see Accent Inns add to their collection, the first couple reflect my British background:

What duck would you like to see the next time you walk into your Accent Inns’ hotel room?