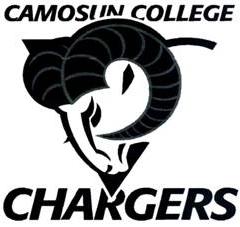 It was a banner evening for the Camosun College Chargers who won gold and defended their BCCAA Provincial Championship title – on home court in front of a ecstatic home crowd!

Taking home silver tonight are the UFV Cascades – the team that Camosun defeated last year to earn the 2009 Championship which was hosted at Columbia Bible College in Abbotsford.

“It was as exciting as it gets during the Men’s Gold medal game”, said John Espley, Business Development Manager for Accent Inns.  Camosun won all three sets but the team from UFV sure didn’t make it easy. Accent Inns was proud to be a sponsor of such an important and well run event.

Like last year, the Chargers took down their familiar foes in three straight sets (26-24, 25-20, 25-23) and despite playing out three close sets, Camosun maintained the lead all the way.

Players of the Match included fifth-year left side Brent Hall from Camosun and fifth-year setter Daryl Wiebe from UFV.

This concludes the 2010 BCCAA Men’s and Women’s Volleyball Championships.