The Sierra Club of BC Fights For Orcas 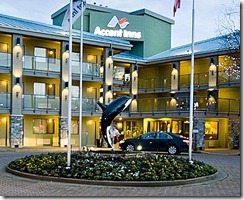 Orca in front of the Accent Inn Victoria BC Hotel

Being a Westcoast based company, caring for marine habitat is important to us. The Pacific Ocean provides us with food, economic benefits, opportunities for education and enjoyment. One of our community partners, the Sierra Club of B.C. takes the time to focus on the issues surrounding such an important resource. One of their concerns has been the health and welfare of the Killer Whales or Orcas. See below for a reprint of a story they just announced regarding some results of  their efforts.

The federal Court of Appeal has upheld a precedent-setting ruling that confirmed the federal government is legally bound to protect killer whale habitat, according to a judgment released February 9.

The federal Court of Appeal has upheld a precedent-setting ruling that confirmed the federal government is legally bound to protect killer whale habitat, according to a judgment released February 9.

In the judgment, the Court unanimously dismissed nearly all aspects of the federal government’s appeal and ordered the government to pay associated costs.

However, in late 2011, three justices of the Court of Appeal heard an appeal by the federal Minister of Fisheries and Oceans of one of the 11 findings made by Justice Russell last year.

The Minister wanted to retain use of the Fisheries Act (Section 35) to allow designation of critical habitat for an endangered marine species. But the same provision that would allow this also allows exceptions, including destruction of habitat. Ecojustice argued that this situation could never satisfy the Minister’s obligation (under the Species at Risk Act) to legally protect critical habitat from destruction.

The appeal court decision means that virtually all of the original ruling has been upheld, and that the Department of Fisheries and Oceans had failed to legally protect killer whale critical habitat.

“Ecojustice and our clients are very pleased with the Court of Appeal’s decision,” said Margot Venton, staff lawyer at Ecojustice. “In upholding the original ruling, the Court of Appeal has confirmed that it’s time to get on with the business of actually protecting these killer whales.”

Learn more about the history of the orca case.

Tom Sandborn covers labour and health policy beats for the Tyee. He welcomes feedback and story tips at [email protected]

« Camosun Chargers Hilary Graham on Chek TV
Does the one you love have four legs? »