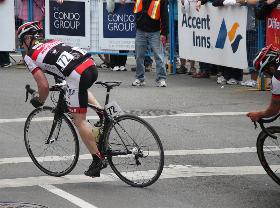 The 2013 Robert Cameron Law Cycling Series returns as the kickoff event for the Victoria International Cycling Festival. This year’s  racing events follow the same race format as 2012 with a time trial on Dallas Road, a gruelling Road Race in Metchosin, and a fast and furious Circuit race in downtown Victoria around the historical Bastion Square. Kids ages 5-10 also get to take part by riding with some of Canada’s top cyclists in the Tim Horton’s Timbits Challenge.

The Victoria International Cycling Festival is Canada’s biggest cycling event that celebrates, supports, and grows the awareness of cycling not only in Victoria but all across Canada.

This Sunday June 2, 2013 is The Russ Hay’s/Accent Inns Bastion Square Grand Prix and Accent Inns is so proud to be a sponsor. Come out and support the elite riders put everything on the line and be just inches from the action. Make lots of noise and shout out to your teammates.

If you’ve haven’t attend a road cycling event before you should, and the weather looks to be sunny and warm, a great time for all to spend a Sunday.

Located in Downtown Victoria, the Bastion Square Grand Prix Grand Prix has been a staple in B.C.’s cycling history for over 20 years. Past winners have included    Olympians — and Victorians — Gillian Carlton, Roland Green,  Andreas Hestler, Alison Sydor and Brian Walton.  Racing on a short, fully  enclosed 900 metre loop through Victoria’s historic Bastion Square, this European-style event features thrills and spills. Check out the infamous “Crash Corner” at Yates and Wharf Streets, witness the “prime” and finish line sprints at Fort and Langley Streets, or enjoy a bite to eat or a cup of java at the many “course-side” outdoor cafes along the route. Thousands of spectators line the route each year to watch riders reach speeds of 65 km/hr, side to side, wheel to wheel.