The Joy of Hanging Baskets 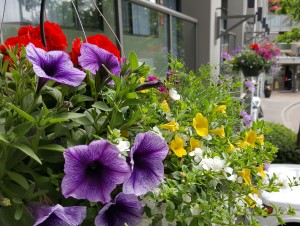 Hanging Basket at the Accent Inn Victoria BC

I love hanging baskets, they are so European. When the City of Victoria first started hanging flower-laden baskets from lamp posts throughout the downtown in 1937 it was rare to see these summer delights in North America. This year will be the 79th year visitors to this fine city will be treated to a floral display second to none – hanging baskets and Victoria are synonymous. This year 1,350 baskets will be hung up during the second week in June, each containing 25 plants and weighing around 20 kilograms. 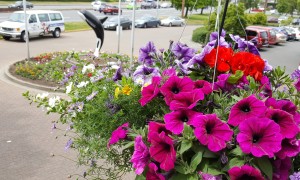 Tagetes, and Silver Falls Dichondra. Each year subtle changes are made in the variety based on the success of the previous year.

The flowers are grown in the City of Victoria’s own nursery and take four-weeks every year to make. They are patterned on traditional English moss-lined wire baskets. In recent years’ nursery staff have built both sun and shade baskets so that more parts of the city can enjoy these spirit lifting, colourful Victorian icons.

Hanging baskets bring smiles to everyone’s faces and that is a major goal of the people at Accent Inns, so they decided some years ago to hang hundreds of them at each of their hotels. Now, going to each hotel is like a mini trip to the City of Hanging Baskets, Victoria, BC.

Can you guess how many hanging baskets there are at the five Accent Inns hotels in Victoria, Burnaby, Richmond, Kamloops and Kelowna? Oh and let’s not forget the two Hotel Zed’s in Victoria and Kelowna. 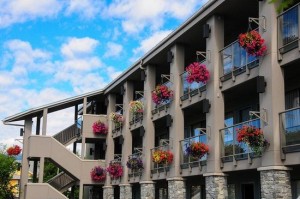 Hanging Baskets at Victoria BC Hotel

If you’d like to know about the history and the making of Victoria’s hanging baskets and make your own “Sun” basket just like those in Victoria, the City’s nursery team has compiled an awesome guide: http://www.victoria.ca/assets/Departments/Parks~Rec~Culture/Parks/Documents/Hanging%20Baskets%20Brochure.pdf