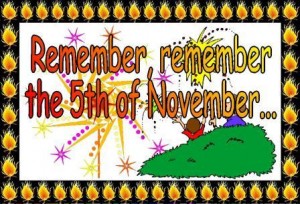 As many of my readers know, I was born and brought up in England, so Halloween was unknown to me until I moved to Canada almost a quarter of a century ago. When I was a kid we celebrated Guy Fawkes Day (aka Bonfire Night) on November 5th. For several weeks prior to the big day we’d make our ‘Guy’ an effigy of the original Guy Fawkes who was part of a plot, to blow up the U.K. Houses of Lords on November 5th 1605. We’d then take it out onto the streets and basically panhandle – calling “Penny for the Guy, penny for the Guy” and depending on how good your Guy was, passersby would toss some change into your hat.

On the fifth, groups of neighbours would come together and light a bonfire atop which the Guys would be burnt. This tradition came from the lighting of bonfires across London to celebrate the foiling of the Gunpowder Plot and the survival of King James I. My favourite memory of those nights growing up were the fireworks – pocket money would be saved for months and my father, and older brother would always bring home at least one gigantic firework to impress the crowd.

In England these days, Halloween is threatening to overtake this ancient tradition, which is a shame, but I can see the attraction of Halloween with all its North American glitz and glamour, not to mention fun.

When we first arrived in Victoria all those years ago it took us a little while to get into the minutiae of Halloween; the carving of pumpkins (actually based on Irish folklore), trick or treating, candy corn, and of course dressing-up. It was the latter that tripped me up on our very first Halloween evening. 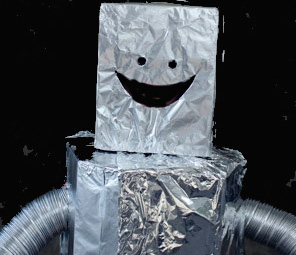 I had the great idea of making a robot costume for our youngest son who at the time was six. I got two boxes from Save-on-Foods, a large one for his body and a smaller one for his head and my wife and I covered them with aluminum foil and various bolts, antenna and the like. When we had finished we were so proud of our work – he looked amazing. His little arms and legs poked out of the ‘suit’ just like little robot appendages. All went well visiting the first few houses, my eldest son was dressed all in black wearing a mask based on a recent horror movie character; he was virtually running from house to house. My little robot however was having difficulty walking as the box that was his body came down almost to his ankles. From his perspective all the other kids were managing to visit four or five houses to his one and therefore his candy bag was looking a little sad.

I swear I only took my eyes off him for a few seconds while dealing with my other son (my wife was at home handing out candy) but when I turned around I couldn’t see him. I rushed back up the path we had just walked down and there he was flat on his back like a turned over turtle – his little arms and legs flailing like crazy as he tried to right himself. It took quite the effort to get the sad little guy back on his feet and some alterations to the costume to allow him to continue.

To this day I still feel guilty about that costume, but we did learn in subsequent years that costumes have to be practical as well as look good. 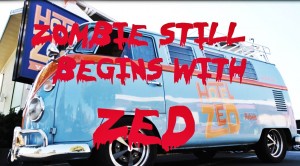 For the second year running, Accent Inns’ sister hotel Hotel Zed has got into the ‘spirit’ of Halloween by making a Zombie movie – see it by clicking here.

All Accent Inns hotels are keen to promote safety on Halloween and here are ten simple tips to ensure your children have a safe, but still spooky, evening.

If your ‘Accent’ is on safety this year, I’m sure you’ll have a wonderfully frightening evening!

« HUB Cycling Staff Retreat to Accent Inns, Victoria
Getting the FSIBC Engaged in your community »