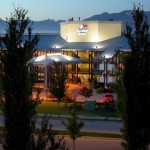 Accent Inn Burnaby BC Hotel close to the movie studios

Are you a fan of the X-Files?  Did you know the original TV series was filmed in and around Vancouver B.C.?  Apparently because of the “dark” nature or “feel” that the show had, the grey weather that Vancouver often experiences was perfect.  How about that, it actually paid to be rainy! The series was filmed in many different locations around southern B.C. (originally) but made it’s home at Bridge Studios right across the Street from the Accent Inn Burnaby hotel.  Although the Accent Inn never had the opportunity to host either of the Stars, the General Manager and staff met many of the “villains”, if you can call monsters and aliens villains. I myself even had the opportunity to meet one of the actors staying at the Burnaby hotel, who thanks to very cool make-up, played two completely different “creatures” in two different episodes. Well for all you other fans out there (I even have the album..)  our house reviewer Gareth has news of a possible third coming…  read more at Skewed and Reviewed