It’s Families First with FSI BC 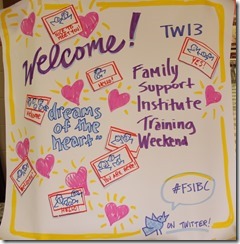 This is the first year Accent Inns has supported the Family Support Institute of BC as part of our InnAid program, but you’d think that this relationship has been in place for years. 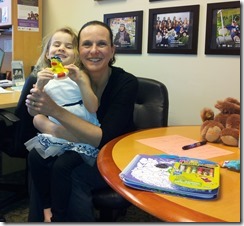 I first met Angela Clancy, Executive Director for FSI BC, at an internet conference and then again a chamber of commerce premiers luncheon. Not that common do I run into not-profit representatives at the more “high-level corporate” events. But then again Angela and the Family Support Institute are not all that common. Their drive to gain support for families with disabilities is unending and has gained incredible awareness in the “inner circles”. That doesn’t mean they are supported as they could or should be but they sure won’t stop until they are.

As always, when I first met Angela I began asking her about the organization she represented and there was no hesitation in her giving me the “lay of the land” for families dealing with disability issues in this province. It was very evident that she had a real passion for the cause. Well as you can imagine it wasn’t that long after that an agreement was created for Accent Inns to start offering support to the FSI BC. The “blow me away “ part was that the directors and others from the organization quickly began supporting Accent Inns as well. I like to use the line, ”we are all in this together”, but here’s an example where two organizations and the people involved really do care how each other is doing. They surprises continued as I was notified that Accent Inns had been nominated and then won the Corporate award! 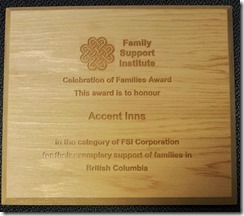 I was invited to attend the 2013 FSI BC annual training, AGM and workshop (conference for lack of a better term) in Naramata BC. Although I couldn’t attend the whole weekend I wanted to show our respect for this organization by attending their awards banquet. After all if they deemed us worthy of an award, should we not honor them by being there to thank them and tell everyone in attendance how we respect what they are doing? When I arrived they were in mid conference but the folks manning the registration and administration table were so welcoming when they heard me say..” Hi, I’m from Accent Inns”. I hadn’t met any of these particular folks but from their greeting you’d think we were all longtime friends. Later Angela came out on a break and with her usual big hug for a greeting, welcomed me to the event as you would if you just a had a long time friend visit for the first time in years. 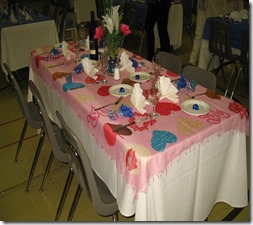 The awards ceremony (4 first time awards were handed out) was actually just a part of their “Gala Evening”. The room was decorated with lovely signs of support for each other on the walls, hearts and confetti on the tables and candles lighting the “stage”. Unique to other awards events I’ve attended not only did they allow the recipients to speak to the crowd in thanks but they encouraged others to come up and say something about each “winner”. 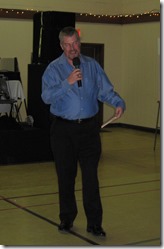 The support and comments for each of the specific volunteer award recipients was incredibly heartwarming. These volunteers had touched people deeply and made a real difference in their lives and so many in the group were more than happy to say so publicly. When it came to Accent Inns turn and they asked for comments…my heart began to pound…had we done OK? Did everyone in the group feel we were as supportive as we should be? Did my thank you speech make any sense at all???

I’m not going to tell you the whole story about the thank you’s but when one mother told her story about how Accent Inns had been a good safe haven when her son was in BC Children’s Hospital…I just wanted to give her a hug and make all her challenges go away, but I learned, that’s what FSI is for. (I did give her a hug later in the evening) There was several times throughout the evening when members & attendees were encouraged to share their feelings and their dreams and although I won’t share their personal feelings here, trust me that the challenges these families face are more than you’d ever think of. Equally FSI giving them the chance to learn from and to support each other is something that must be experienced. Their dreams… let’s just say just thinking of them now brings a tear to to the “Mountain Man’s” eye. What you may think of as “simple” things, to their children and families mean so much. 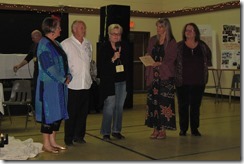 I can’t thank Angela and the FSI Board of Directors not only for forming a relationship with Accent Inns but for also allowing me into their circle. I’m ever so grateful for the experience. The next time you see a family with a child with disabilities, take a moment and just try to imagine yourself in their shoes.

Please take a moment to visit their website and learn more and if it’s in your heart to support them.. they are more than deserving. 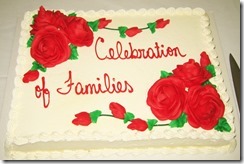