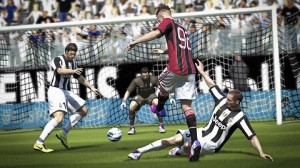 With the worldwide impact of FIFA at an all-time high, EA Sports has captured the majesty of the sport of Soccer with the amazing FIFA 14. The game is available for the PC, Playstation 3, and Xbox 360 systems and is due soon for the next generation consoles.

While I played Soccer in High School I will admit that my knowledge of the professional game is limited as names such as Pele, Beckham, and Donovan are the players that I would be able to identify the easiest. Regardless of your level of skill and experience, FIFA 14 has something for you from eye-popping graphics to the most realistic action and player options of any soccer game to date.

Some of the best changes are in the A.I. of your players as they now make much smarter and more tactical runs that allow players far more options when devising their tactics. Players also have better options to accelerate and shield the ball which is very good as the defense has improved and players will have to make sure to put some thought into their attacks and passing and not rely simply on blasting as many shots as they can on goal.

On the subject of passing this is my biggest frustration with the game as I found it often hard to be accurate and that passes were often slow which allowed defenders to get back in time to thwart my strategies.

Thankfully the improved shooting mechanics that allow players to adjust stride, approach, and angle combined with improved ball physics and you have far more options than before on how to attack the goal and in time, get your shots in the back of the net.

As in the real sport, the refs can be a pain as they can really raise your ire by calling fouls in a questionable fashion but that is simply part of the game.

While fans are always going to find something to complain about or nit-pick in every sporting simulation, FIFA 14 is a step forward for the franchise and is well worth adding to your collection.

« It’s Movember in Kelowna
Black Friday – Not in Canada EH? »