Christmas Lights – From Candles to LED 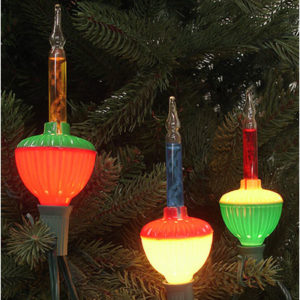 When I was very young my parents always made a big deal out of Christmas and my father brought home the biggest tree he could find. As we lived in England and at that time didn’t own a car, he’d have to bring it home by bus and train. This was all fine until one year the tree was so big he couldn’t get it in the train and when the doors closed the top foot of the tree was trapped outside. The journey wasn’t kind to it and when he got home he had to saw the top off – it looked a sorry sight indeed!

My other memory is of our tree lights; they were very special and to this day I don’t know how my folks afforded them. They were round balls of light with hollow glass tubes fixed to them that looked like candles. The vials were full of coloured liquid and when the bulbs got hot they bubbled and flickered like real candles. I’ve never seen anything like them and wish they had survived to decorate my tree this year.

Of course, back in the day they used real candles to light the tree. They were affixed by either melted wax or wire. Later to make them safer, small candle holders with clips were invented. Still, open flames and drying trees was not a good combination and after a massive fire occurred in New York City in 1917 the drive was on to find a safer way to brighten up the tree.

The very first electrically lit Christmas tree was placed in the front window of Edward H Johnson’s home, who was a Vice-President of the Edison Electric Light Company. It was lit with red, white and blue lights – very patriotic – and powered by a generator which also rotated the tree. It was of course, also a marketing stunt.

Some years later, in 1895, President Grover Cleveland strung 100 multi-coloured lights on the White House tree and that helped to make it a tradition across North America. Although, in those days a small string of lights cost the equivalent of $350 in today’s money. Prices soon dropped dramatically and lights on trees and subsequently house became very popular with people from all walks of life.

If you’re in the process of untangling your lights again this year – why do they always get tangled, no matter how much care you take when you put them away – then spare a thought for The Gay family of New York who placed 601,736 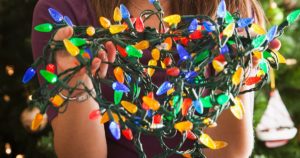 lights on their house and on their grounds. It took around eight weeks to finish and to entertain you while you gape there is a 200- track song list.

Over the year’s trends have changed and so has technology. At one time everyone put up multi-coloured lights and then trendy folks went monochromatic with all white, or blue; then there were icicle lights – my favourite – and from there small lights made an appearance, and this year I saw giant lights the size of a soccer ball in a store.

Technology has changed making incandescent Christmas lights a rarity and not surprising considering the new LED technology uses 70% less energy! When you consider across North America around 165 million lights are sold each this makes a massive environmental impact.

Okay, a warning, this post is about to get technical – I don’t know about you but I’ve never really understood how LED lights work, having never studied particle physics. So, on behalf of my readers, I tirelessly searched for something that even I can understand and found the following on a government energy website www.energy.gov. At last I understand – sort of.

While incandescent light technology is relatively straightforward (a heated filament glows much like any ember in a fire), the mechanics of LED lights are much more sophisticated. It requires a bit of insight into particle physics to understand, but I’ll give you the quick version: A diode consists of something called a p-n junction — two semiconductor materials next to each other, one with a positive charge (p) and one with a negative charge (n). When current is applied to the system, electrons from the negative side move toward the positive side. On the positive side, particles called “electron holes” move toward the negative side. When an electron and an electron hole collide, a small amount of energy is released as a photon. The result is the visible light we see in an LED. 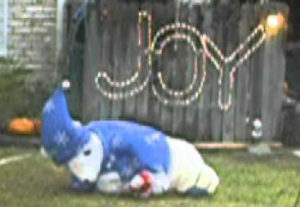 Well, I’ve got to go now as my polar bear has just fallen over and Rudolph is getting a little too close to Prancer.