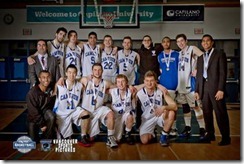 The Camosun College Chargers men’s basketball program has ended its four-year absence from the podium at Provincials, finishing third at this year’s PACWEST Championship to bring home Bronze!

Landing Top 3 was no easy feat for the young squad who earned its medal finish amongst teams equipped with considerable size, strength and experience.  It was a do or die situation in Thursday’s quarterfinals where the Chargers had to defeat Douglas College, a very dangerous offensive team and the only team in the conference that was able to beat the top-ranked VIU Mariners in the regular season.  Camosun managed to pull out the win 68-62, leading the game through all four quarters.

The win advanced Camosun to the semifinals on Friday where the team went up against the high-powered UNBC Timberwolves, the conferences’ No. 2 team and soon-to-be PACWEST Champions.  Despite a strong first half in which the Chargers held the lead 35-31, Camosun could not maintain their momentum and fell 93-84.  UNBC went on to the Gold medal match where they knocked off the No. 1 seeded VIU Mariners 69-61 to earn the conference crown.

The loss to UNBC placed Camosun in the battle for Bronze on Saturday.  It was a thrilling victory for the Chargers men who came from behind to defeat the Blues 84-78.  The Chargers trailed 23-17 after the first quarter and 45-39 at halftime as the Blues continued to pressure them and force difficult shots.  In the second half, Camosun continued to chip away at Capilano’s lead and by the end of the third, it was 63-58 for the Chargers.  Camosun rose to a 10-point lead (71-61) in the final quarter but a persistent Blues squad answered back to regain the lead 75-72 with three minutes on the clock.  With relentless determination, the Chargers turned the game in their favour again 78-77 and maintained the lead to win the game by a solid six points.

“Defense and determination turned things around in the second half versus CAP,” commented Chargers Head Coach Craig Price.  “We were very determined to play hard physical defensive basketball during both games against UNBC and CAP.  I think our last two games were our best played games.  We also had a number of players rise to the occasion on offense.  Blake Mansbridge was quietly amazing while Trevor Scheurmann and James Blanford were much more obvious in their contributions.  Drake Downer and Brandon Chan gave great performances and do not get enough credit for their heart and defensive play.”

With the Bronze in check and the 2011-12season in the books, Coach Price and the Chargers are looking ahead to the upcoming year and the standard has been set.

“I think there is an opportunity next year,” said Coach Price.  “With UNBC leaving the league and VIU in the midst of a coaching change there is an opportunity for other teams to make some playoff noise.  We will be meeting with the players next week to get some feedback on the season and their plans for the future.  Our development is dependent on continuity and the hard work of the players.”

« We Should All “Be A Tourist”
Medical Needs Drive Partnership »