Accent Inns is a proud sponsor of the Camosun Chargers,  Below is a re-post of their latest press release 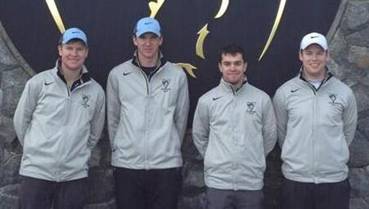 The Camosun College Chargers men’s golf team earned their second consecutive Bear Mountain Collegiate tournament title this past weekend, finishing five-strokes ahead of the competition and starting the 2013 season off with a great win.

“It was a terrific weekend of golf at Bear Mountain,” comments Chargers Head Coach John Randle. “The courses were in fantastic shape and the players had a great time. I am proud of my guys for pulling out a victory so early in the golf season.”

The men’s individual title came down to a three-way tie between Camosun’s Jared Hundza, VIU’s Kristian Hrabowych and Kevin Piper from Grant MacEwan. Kristian Hrabowych collected the win in a playoff with a birdie on the first hole.

Rounding out Camosun’s winning two-day total was veteran Kevin Walz who completed the weekend with 148 and teammate Grant Maskiewich who finished with 150.

The women’s side of the draw saw three teams of two tee-off with Grant MacEwan’s duo of Megan Vermillion and Sydney Johnson-Parker taking first place with a weekend score of 315. Grant MacEwan’s Team No. 2 finished second with 346 while VIU placed third with 356.

“As usual, Bear Mountain was a great venue and we look forward to the 4th annual event next spring,” reports Coach Randle. “Special thanks to Tour Player Darren Griff who came to speak at our post-tournament dinner on Saturday.  He shared a lot of experiences and the student-athletes really appreciated it.”