Camosun College Chargers gear up for 2011 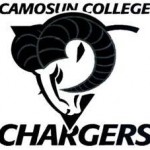 Camosun Chargers begin second half of the season

The Camosun College Chargers men’s volleyball team has shaken off the holiday rust and is set to start the second half of the BCCAA season with an Island Rivalry match up against the VIU Mariners this Friday evening in Nanaimo. The second and final round of matches in the 2010-11 Island Rivalry volleyball series is sure to be a hot contest and promises to deliver a great evening of volleyball action.

To augment the team’s training and development, the Chargers traveled to Kelowna over the holiday break to take part in a three-day training workshop which included a number of top teams from BC and Alberta.  “We wanted to accomplish three things with our trip to UBCO over the holidays,” explained Coach Parkinson. “We wanted to get the rust off, to continue to evolve our style of play and learn about ourselves in different situations, and to have fun.  In my mind we accomplished all three.”

“I think I’m too young to retire”

“It is a long season and our Annual Plan is designed to help us peak when it counts,” said Coach Parkinson who earned the BCCAA Men’s Volleyball Coach of the Year award in 2008-09 and led Camosun to a CCAA Bronze Medal (2008-09) and two back-to-back BCCAA Provincial Championships (2008-09 & 2009-10).  “Having said that, we have to continue to improve late in each set and start to win more matches so we can build momentum for the stretch run.” Aside from leading Camosun from one Championship to the next, Coach Parkinson, who has undertaken several pursuits since retiring from his full-time position at the Ministry in 2010, has taken on a new role at Camosun as a faculty member in the Center for Sport and Exercise Education, teaching a fourth-year Sport Management course in Media and Public Relations.

“I think I’m too young to retire completely,” admitted Parkinson.  “But I figure I’m old enough to stop working at a regular job.”Coach Parkinson added, “My whole life has been about sport and I have no plans to change directions.  I really enjoy the people and the energy and I’m at a place where, given my age and experience, perhaps I can give a little back, which is pretty easy to do when every day is a Saturday.”

‘Chargers have only begun to work towards turning the season around

The Camosun College Chargers women’s basketball team hit the hardwood over the holiday break in preparation of the second half of the BCCAA season.  Despite hosting the 5th Annual Christmas Classic holiday tournament and sweating it out at daily practices, the Chargers have only begun to work towards turning the season around from a disappointing first half which left the team 4-4 and ranked seventh in a field of 10. “We will not know how successful our practices over the break have been until we get going with our league schedule,” said Coach Westcott.  “Our only goal is to play as well as we can while improving defensively and cutting down on turnovers so we can make it into playoffs in March.  From there, everybody starts from scratch and we get a mulligan at that point in the season.” The top ranked Capilano University Blues lost their star player Alexandra Polischuk to academics over the Christmas break. Polischuk led the league at the close of the first half with an average of 25.6 points per game and 6 assists.  Undoubtedly, the BCCAA league leader’s absence will have a negative impact on the top ranked team.  “With Capilano’s academic losses, it is now clearly VIU’s league to win in the second half of the season,” commented Coach Westcott.  “They have the best talent and depth in the league so we are in for a tough fight to get going in the second half of the season.  Hopefully we will be competitive and give ourselves a chance to pull an upset rather than shooting ourselves in the foot repeatedly like we did in the first half.”

“I always feel like the little brother at the Island Rivalry”

The Camosun College Chargers men’s basketball team headed south of the border over the Christmas break on a soul searching mission.  Armed with a new sense of confidence, the #4 ranked Chargers are gearing up to make some noise in the second half of the BCCAA season, starting with what is anticipated to be a great Island Rivlary match up against the VIU Mariners in Nanaimo this Saturday at 8pm.

Over the break, the Chargers took on three US teams – North West Indian College in Bellingham, Spokane Community College and North Idaho College in Coeur D’Alene.  As a team with a similar talent level, NWIC provided a good warm up for the Chargers who needed a rush shaker following exams and the festivities of the holidays.  However, it was Spokane and North Idaho which provided the Camosun squad with the push they needed to reach their “ah-ha” moment.

“As a young team, we have a tendency to play to the level of our competition and we can’t seem to crank it up and play at the level we want to play at, on a consistent every-day basis,” explained Chargers Head Coach Craig Price.  “We went down to the States to play teams that are at much a higher level and go head to head with athletes who play with a higher intensity and effort.  In order to compete with them, we had to raise the bar and bring our level of play and all the components to it up.”

“I always feel like the little brother at the Island Rivalry,” admitted Coach Price.  “We will need to be at our best and compete the entire game.  VIU will come out and be physical and play defense and they will be playing their style of ball.”