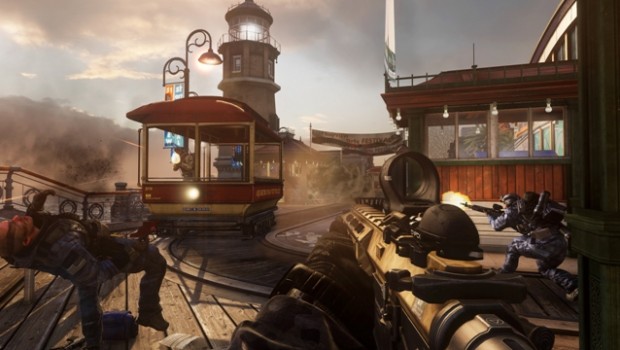 Call of Duty: Ghosts gets a much needed update with the release of Onslaught, the first of four planned DLC packs for the game.  The new content requires the full version of Ghosts to play and offers up a plethora of content including four new maps, a dual mode weapon, and a new episode of the alien invasion game, Extinction.  For me Ghosts was filled with frustration on the multi play side as I found many maps were too large and encouraged camping, which as anyone who has been spawn killed numerous times in a row will tell you, leads quickly to frustration.

First off the new Maverick Assault rifle offers power and a high rate of fire for up close and personal combat. For those wanting to do their dirty work from afar, there is also a sniper rifle customization that will give fans of sniper action plenty of options.  The new maps are some of the most fun I have had in Ghosts and for me, were more enjoyable than many of the maps that shipped with the game as they allow for multiple styles of gameplay.

Bayview
Is a whimsical and fun map set in a California Coastal  town. It is great for close quarters and run and gun gamers like myself, but has plenty of tactical spots for those that like ranged attacks. The great thing about the map is that it is lots of fun to play.

Running through gift shops, restaurants, the aquarium, and other tourists locales made this a very fun and engaging map. The action is intense and you can even take a ride on the trolley car that roams the boardwalk. One inspired gamer but his Sentry Gun on the car and watched as it road up and down the map picking off enemies that dared get near the tram.  I loved seeing the naval units off on the horizon in a pitched battle which made me think of the action in Modern Warfare 3.

Containment
This is a battle in an abandoned Mexican village after a truck has crashed and spilled nuclear material. The combat is on two levels on two sides of the town with a No Man’s Land in the middle in the guise of a partially destroyed bridge.  From a bar, a church, and the streets, the action is intense in both ranged and close-quarter combat and the map offers plenty of charm and diversity.  Some like to snipe from the windows while others like myself like to sneak their way across and battle in the blasted out bars and shops of the town.

Ignition
Set in an abandoned launch facility I had to dodge firing rockets, sniper fire, and all manner of nooks and hiding spaces for enemy units to attack me from. This is a large map that is spread out but there are some great areas for players to get results with a little planning.  The map has long corridors that provide plenty of options to snipers but also numerous options in which to flank and attack. There is even a plane fuselage for players to travel through as well as plenty of multilevel and cover laden office buildings and labs.

The rockets will randomly fire and setting off either of the two engines will result in some great things happening to the enemy units and with careful planning, players can blast away while they run for cover.

Fog
This is a creepy and quirky map that is set in a swamp like area complete with caves, fog, shacks, and uneven terrain. At first I did not like it as although nice to look at, it seemed to encourage camping and sniping. My thoughts on the map changed the next time through thanks to the run and gun style of play that was going on. Suddenly I heard the familiar music from “Halloween”, and Michael Myers himself appeared and dispatched me and several of my team with an axe.  Several shots and grenades did not slow Myers down at all so I learned it is best to stay away from him or simply accept multiple deaths while he is on the map, unless you can get several shots off while he is busy dispatching others.  If a player completes a certain Field Order, they become Myers and the music will let everyone know to prepare.

For fans of Extinction, there is a new episode called Nightfall which introduces two new alien threats as well as a new weapon and challenges for players to survive as it is a highly enjoyable adventure. This content actually builds on the whole experience and to me seemed like a vital and necessary part rather than a simple bonus map.

I can honestly say that this is the most fun I have had with any of the DLC for Call of Duty as while I have enjoyed maps in the past, I have not had a collection where I enjoyed playing all the maps as much as I have this one and what is a bigger surprise to me is how much it has restored the fun and enjoyment that was missing in Ghosts for me as for the first time since Black Ops 2, I am eager to get back to the fight and level up my character.

While hit counts, play balance, and hackers still hamper the game, the review is for the new content and not the game as a whole and as such, Onslaught delivers in a big way.  Activision recently announced that the second DLC pack named Devastation will appear on the Xbox Consoles in April with the PS 3 and PC versions to follow.