Bike to Work Week a Success!

May 30 -June 5.  A hearty congratulations go to all those participants in this years Bike to work week.  A special thank you to the organizers and volunteers of the Victoria and Kelowna celebrations for allowing Accent Inns to be a supporter of your events.

Bike to Work Week Kelowna was a smashing a Smashing Success!   Over 1700 cyclists took part in our Bike to Work Week events last week. I know many of you came to more than one, but that is incredible! Thank you so much for all your support. The momentum has been building for the past eight years and we are still getting more teams than ever before.

Over 450 people attended the wrap up BBQ on Friday afternoon at Parkinson Rec Centre. (so cool to see many wearing the Accent Inn Bike Lover stickers -editor) 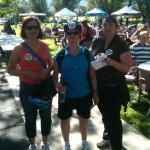 A huge thank you to the guys from Smoke on the Water for cooking the pulled pork, to Urban Harvest for supplying the salads and to CupCasions for the mini cupcakes. (the food was awesome indeed) We also want to thank Slade and the BMXers from Cyclepath for setting up and riding the half pipe, to Sarah Martin and everyone from Lululemon for putting together the function show and to Steve Merlo and the students from Kelowna Rock School for the musical entertainment. BBQ Draw WinnersCongratulations to Tricia Masters from the Capri Commuters and to Sandra Dyck from the Mission Creek Church for each winning one night’s stay for two any Accent Inns locations. (we look forward to welcoming you to any of our five locations in BC!)

Urban Harvest awarded Barb Van Essen her one year supply of veggies for winning the Referral draw and Kate Bergen from the City of Kelowna announced that the winners of a GranFondo Ticket and bike computer were Dana Sleigh and the Acro Media Team and Irene Hawrysh from Canada Post. Congratulations and thanks so much for participating daily in Moustache Mania!
T-Shirts: Buy your Bike to Work t-shirt $7.50 at Parkinson Rec. Centre until the end of June. (they look really awesome – wearing mine as I post…and they have an Accent Inn logo on them..what more could you want!) 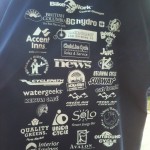 Accents Inns, proud to have our logo on the really cool t-shirts!

Behalf of the City of Kelowna

Thanks to the folks at Global affinity for putting together a great program! 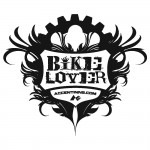 Check out this cool logo that's on all the stickers!