Act like a local in Victoria: 10k fun-runs, ice cream, coffee and the beach 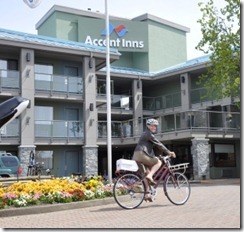 If you were returning to home with your active, outdoorsy family after spending nearly a decade overseas as an expat, where in Canada would you choose to live?
For us the choice was simple: wherever there was no snow in the winter and no rain in the summer, which left us with just one choice out of all of Canada. Victoria, located on the southern tip of Vancouver Island, in British Columbia, north of Washington State’s majestic Olympic Mountains, has pretty much the best weather in Canada. On top of that, there is lots to do here, especially if you enjoy the outdoors. There’s a reason why Victoria is ranked as Canada’s fittest city.
As I mentioned in a previous blog post, we’ve spent a lot of time since our return convincing friends from all over the planet to visit us here on our island paradise. And for our friends who do manage to make it to our corner of the world, the Accent Inns website does a great job explaining all of the tourist attractions and local staff pics and we also are sure to give them the inside scoop on what active locals do for fun in this amazing little city.

Here’s what we tell them:
Go for a run
As mentioned, Victoria calls itself “Canada’s fittest city“: 36 per cent of the adult population is active, nearly double the national average. Warm, snow-free winters means our family can be active 365 days a year, and one thing we like to do as a family is go for a jog along the ocean. In fact, there are two semi-professional road races are family-friendly. The TC 10k, (held at the end of April this year) while attracting top runners from all over the world, also provides an easy course for younger runners as the course winds its way along Victoria’s beautiful coastline, under the shadow of the snow-capped Olympic Mountains to the south, across the Strait of Juan de Fuca. We arrived back in Canada at the beginning of April and the TC 10k was one of our first family outings.
The more serious Royal Victoria Marathon in October, while a certified Boston Marathon Qualifier, also features a kids race, plus plenty of fun activities for children. If your family is into running, you need to spend some time in Victoria.

Victoria is also Canada’s most bike-friendly city, and it’s easy to believe that our city may be the most bike-friendly city in North America – and Accent Inns is making Victoria even more welcoming to bikes. While there are plenty of bike lanes and bike routes, most importantly motorists tend to expect bicycles to be on the road, so cycling here is much more pleasant than in other cities.
In fact, I often take my two sons by bicycle through the middle of town. Why? To reach one of the most fantastic attractions in Canada – the Galloping Goose Regional Trail. Named after a former steam engine, the Galloping Goose Regional Trail stretches from downtown Victoria 60 km west to the seaside community of Sooke. While a 120 km round-trip journey is not really suitable for young children, the downtown section of the trail is great for riders of all ages. As the trail meanders along Victoria’s Inner Harbour it passes a number of shady parks that are a great place to rest little legs, and there are coffee shops and bistros facing the water that sell cool drinks or gourmet coffee.

Go to the beach

Located at the southern tip of  Vancouver Island, Victoria is surrounded on three sides by ocean, and we tell friends who are contemplating visiting that their hotel room will never be more than ten minutes from the beach. The beaches and rocky coastline below Dallas Road are perfect for a morning or afternoon spent bouldering with children and checking out marine life, and the nearby Beacon Drive-Inn is where we head for Victoria’s best ice cream.
Willow’s Beach, a 10-minute drive from downtown Victoria in suburban Oak Bay, offers beautiful white sand that’s perfect for sandcastles, a stunning view of the San Juan Islands, and a cool, shady grassy area with a playground and a volunteer-run concession stand. When we want to get a taste of the West Coast and its wilder, more natural landscape, we travel 20 minutes by car to Witty’s Lagoon with its sandy beach that stretches out for about a quarter of a mile at low tide. Witty’s Lagoon is a great place to spot seals, sea lions, migrating shorebirds, and even the occasional passing whale. The park offers some great light hiking courses perfect for families and young children.

Nevin Thompson writes on behalf of Diversified Health Clinic, which helps runners, golfers and other active folks improve their game.