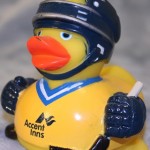 Hi Everybody,
As a former NHL Hockey Player I’ve always felt up to just about any challenge.  Well, perhaps I got a little out of shape while working at Accent Inns but it was never really an issue until the day she joined the team.

She is Karen England, the Regional Sales Manager for Accent Inns on Vancouver Island and I think she has a crush on me.  Last week she asked me if I’d like to take a trip with her.

“St. Paul?” I said. “As in Minneapolis-St Paul? I used to play hockey there.”

I’ve always been an adventurous kinda duck and so I said “Sure.  Why not?”

I don’t really know where Nepal is, but I expect she’ll tell me what I need to know.  She said she’d pick me up Monday morning and we can get started with my training.

WWhere the heck is Nepal???

Apparently our flights are all booked and the trip is all organized.  All I have to do is train and shop for gear.  This is to be a very special trip with just 3 of us going – myself, Karen and her friend Lupita from Vancouver.

Karen picked me up this morning and you will never guess what she had in mind.  She wanted to climb up Mt Doug.  So I said to her “That mountain is over 700 feet high and the walk is straight up.  I know because I’ve been up in a car.  Why would we want to do that?” 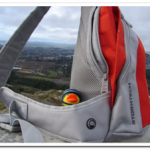 Then she had to nerve to tell me that where we will be going is a lot higher than that.  That’s when things got serious.  I needed more information.

“Where exactly is this Nepal place?” I asked.

“Have you heard of Mt Everest?” she asked back.

“Of course – it’s the highest mountain the world, isn’t it?”

“Yes, it is….and we are going to the Base Camp that the serious climbers leave from.”

“OK, so a Base Camp sounds OK.  That would be close to the bottom, right?”

Well, that sure put a new perspective on things.  I’m not a spring ducking anymore and quite frankly, neither is Karen.

Unfortunately it’s too late to back out.  The arrangements have been made and we leave on March 25.

When Karen asked me to go to Nepal, she forgot to mention all the “Medical Stuff” that’s involved.  Apparently I can’t just dial 911 and have an ambulance arrive if I have any problems.  We’ve been to the Travel Medical Clinic and I believe I am now immune to every disease ever invented.  I’m also afraid that I may start leaking with all these extra holes they poked in me.

I can’t believe the amount of stuff that we need for this trip.  I think the gear costs more than the trek.  However, I love to shop and so have spent many hours in all the Outdoor stores in Victoria.  Karen is going for the colourful look with clothes of every colour.  She says it’s a good idea in case she falls off the mountain.  Lupita and I are sticking to a more conservative look.

I asked about falling off the mountain.  Although she laughed, she did tell me that the primary rule is to always keep on the mountain side when meeting or passing a yak.  I have no idea what a yak is but I suspect it’s just a bigger version of my friend Becker.  I wouldn’t want him kicking me off the side of a mountain.

Becker has joined us on some of our trips up Mt Doug but apparently he’s not joining us on the trek.  Too bad, I could use a little help! 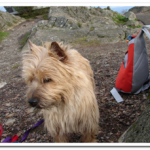 Now we’re going for a run.  Will this madness ever end?