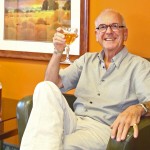 On Thursday April 28, 2011 friends, colleagues and supporters gathered at Tourism Victoria’s annual general meeting witnessed Terry Farmer being named this year’s Life Member award recipient. “A successful entrepreneur, tireless volunteer and beloved employer, Terry Farmer, founder of the Accent Inns Hotel Chain, has made British Columbia a better place to live, work and play,” said a long time employee with the locally owned and operated hotel chain and those words were repeated as Dave Cowan, GM of the World Famous Butchart Gardens named Terry farmer as the first ever recipient.

No matter who describes his work ethic – loyal employees of Accent Inns, tourism operators who have enjoyed his vision and expertise, or his family who are following in his management footsteps – they all reply that Terry Farmer is a man who cares deeply about people, his community, the environment, and tourism in this province.

Terry is a long-time supporter of tourism in B.C. and has been recognized with a lengthy list of accolades and awards. Terry was awarded Entrepreneur of the Year Award for Tourism and Hospitality (Pacific Region) in 1998. In 2002, he was presented with the Queen’s Jubilee Medal: an award given to those Canadians who helped develop the country over the past 50 years. In 2005, he was awarded the Generosity of Spirit Award and in 2008, Terry received an honorary Doctor of Laws from Royal Roads University, he has also received the Rotary Community Leadership Award. Terry has and continues to serve as a volunteer on the boards of numerous charitable, sports and community organizations. Some of the organizations include the 1994 Commonwealth Games, Patrons Council, Greater Victoria Hospital Society, YM-YWCA and the Community Welfare Council. Today, Terry is a volunteer speaker at United Way Leadership presentations and is a member of the go2 Speakers Bureau: a resource for employers in tourism. He’s also chair of an adhoc committee on Tourism, appointed by Dr. Alan Calhoon, President of Royal Roads University and is a director of Pacifica Housing.

Terry is proud to be an active member of his community and a role model for others, however, he maintains that the role of father and grandfather is his greatest achievement.

Mandy Farmer, daughter and now President and CEO of the Accent Inn hotel chain, received the award in Terry’s absence and was visibly proud of her father’s achievements. 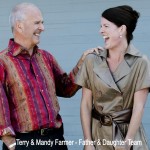 Mandy Farmer, proud to follow in her father's footsteps