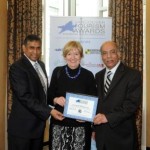 Zully gets award from ChrisBrowne and Suzanne Anton

All of us at Accent Inns are very proud of staff member Zully Rahemtulla, winner of the November 2010 Vancouver Tourism award. Zully is the Night Auditor and a guest service agent at the Accent Inn Vancouver Airport (Richmond).  One of the Vancouver Airport hotels guests had visited the nearby Costco and unfortunately left their keys behind. Once they realized what they had done they spoke with Zully and asked for his assistance as they caught the hotels airport shuttle. Zully took the time to visit the store where they had left their Keys (twice). His efforts were rewarded as the Costco staff found the missing keys. Zully then had the keys waiting at the hotel for the guests return from their holiday trip. You can imagine the guests joy at finding their keys waiting at the Accent Inn on their return trip, in fact they were so impressed they took the time to nominate Zully. 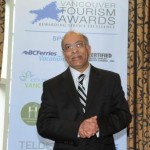 On March 8th 2011, The Accent Inn Vancouver Airport’s general manger, Chris Browne along with Vancouver’s Deputy Mayor Suzanne Anton, awarded Zully Rahemtulla a Vancouver Tourism Award. Zully joined the Accent Inn Vancouver Airport in October 2007. Zully is a great husband and father of two. He has a passion for baking and owned and operated his own Bakery Shop in Toronto for a number of years. His friendly disposition and commitment to the hospitality industry has allowed him to work at other prestigious hotels before joining Accent Inns. Zully is often heard saying that he is so happy to be part of the team at Accent Inns.

Chris Browne commented; “Zully is a friendly and caring person and always eager to assist others in need. He enjoys dancing and has shown his skills and moves at a number of our Staff Christmas Parties”. 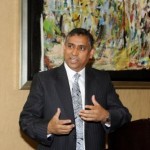 « Accent Inns now offers a Reward program for your Pets!
We Don’t Serve Crap to our Guests »