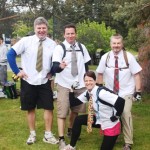 Several months ago Mandy Farmer, the President of Accent Inns put the word out that she was looking for volunteers to participate in the Power to Play adventure race. The race is in support of the great work done by the Power to Be organization with challenges designed by Anthony Bishop who also designs for the TV shows Survivor and the Amazing race. Always having community spirit and a sense of adventure it didn’t take long for several volunteers to come forth from the Head office staff and so was born the Accent Inn “Dusters”. The intrepid volunteers (or sacrifices depending on your perspective) were Dave Splawski, Chris Knight, John Espley and our “fearless leader” Mandy Farmer. 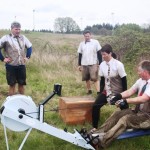 The race started off with a wonderful dance by the volunteers and well wishes from the organizers. The Dusters brought a little class to the event, all wearing nice shirt and ties. We were challenged with Batting and kicking Balls and Dave showed us that he is indeed a superior soccer player. Mental puzzles and even a shooting (pellets only) challenge were presented. Being the intrepid camper, John’s favorite was the blind fold set-up a tent challenge. Chris was a very strong competitor the whole time (especially carrying sandbags) but went a little to far with his running dive down the “slip-n-slide” where he ended up having to be checked out for a possible concussion. 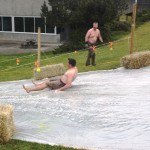 Chris on the slip'n slide

After the paramedics examined his head and found nothing….nothing wrong that is…the team was on the way again.  The mud challenge where we had to use our bodies to carry mud and fill a bucket was actually quite fun and the Dusters even gained ground on a group of pirates that were also competing. 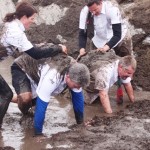 Power to play 2010 Accent Inn Dusters in the mud pit

Our team work really shone through as we did well on the many challenges we faced and especially during the two times we had to climb “the walls”. Lifting and pulling each other we made it over the walls like they were nothing….well at least like they were perhaps a foot shorter than they were…lol I (John) actually ended up cracking two ribs when he came down hard off the “A” frame. 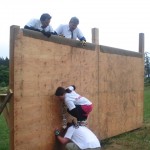 Climbing the wall at the power to play 2010

I cannot deny that the physical challenges were extremely tough (Dave even took a layer of skin off his leg in the rope challenge) but Mandy was a real stand out. This was her second year racing! Mandy’s constant support and encouragement for the rest of us and her great physical conditioning ahead of time showed through as she practically made the rowing machine spin off its axis. Note to self:  work out a whole lot more prior to any future adventure races. 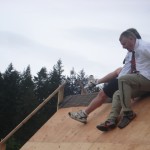 The infamous A frame

All in all the Dusters are very proud of our performance during the race and especially proud of our fundraising. Our team raised $3522.50 for the cause. We could not have done so well without the help of our colleagues in the Accent Inn chain. We had a little challenge before the race between our various hotels that whoever raised the most and if we achieved our goal, Terry and Mandy Farmer would spend time cleaning rooms at the winning location. Our Accent Inn Victoria, Kamloops and our Blue Ridge Inn properties all raised money for the team. The Accent Inn Victoria and Kamloops hotels did so well that Terry and Mandy Farmer agreed to clean rooms at both (watch for a future post on that!). 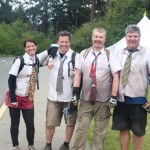 Thanks again to all who donated, all the volunteers that put together the race and to Tim and his team at Power to Be for their incredible work with the children.

Click here for a link to the full photo gallery.

« Canuck Duck comes home from Everest
I like Mud »