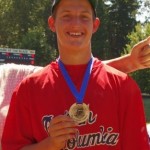 Alex Fraser, son of Julia Fraser, wins silver at the BC summer Games

This July Alex Fraser, son of the famous Julia Fraser (Regional Sales Manager for Accent Inns Kelowna and Kamloops) won a silver medal at the BC Summer Games in Langley. Alex played for the Thompson-Okanagan Team which finished 1st in their pool which earned them a semi-final game against Vancouver Island. In the semi-final game, they defeated Vancouver Island 8-7 (tough for Accent Inn Victoria staff routing for the Vancouver Island team). “It was a thrilling game and it was probably the best the Thompson-Okanagan Team has ever played”, said Julia Fraser, Regional Sales Manager and proud Mom. In the Championship Final for the Gold, they lost a heartbreaker to Fraser River/Delta 6-3 (a tough loss for our Accent Inn Vancouver Airport staff) 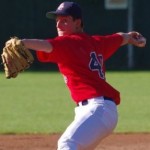 Alex Fraser pitching at the BC Summer games

“The BC Summer Games are one of the best local sporting events in the province and we are so proud and happy for Alex (and his mom)” Mandy Farmer, President and CEO Accent Inns.

Accent Inns and its Founder have actually had a long history with the BC Summer Games. Aside from several of the Accent Inns staff volunteering at the games (including the author..) back in 1987 Terry Farmer, the founder and Chairman of Accent Inns, was named the Chair of the 1988 BC Summer Games held in Victoria. It was one of the largest Games that BC has ever had (More than 5,000 athletes and 5,000 volunteers). It was also the first time that the para games were included in the BC Games, something that was very important to Terry. He has  made a point of making sure Accent Inns always try offer barrier free facilities to those that need them. Terry comments. “The BC games are wonderful for helping to promote sports in our communities and they give many young people the chance to compete in a major sporting event. I also found it wonderful to see all the volunteers participating, especially the seniors, as it gave all a sense of pride and the opportunity to contribute to their community”. 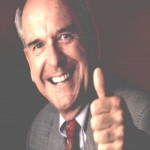 Terry Farmer then went on to become a vice chair of the International Commonwealth Games when it was held in Victoria in 1994. Accent Inns is proud of the legacy it has in supporting sport around the province of BC. Who knows, perhaps Mandy Farmer will someday follow in her father’s footsteps and become chair of the International Olympic committee and preside over Alex Fraser winning a future Olympic Gold!