Are You Scared of Ogopogo or Cadborosauras? 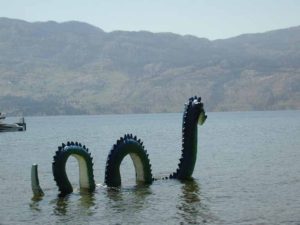 Every since I can remember I have been fascinated with the Loch Ness Monster, it always seemed to be in the news when I was growing up in Britain. Countless times a grainy black and white photo would be published in the newspaper, or shown on television that would convince me there just had to be something prowling that mass of water. Expeditions were launched and boats went out on the Loch with sonar devices to try and track the monster down. We all waited with baited breath.

When I first came to Canada almost a quarter century ago I was so pleased to discover that my adopted home had a few monsters of its own, especially Ogopogo. I remember shortly after we arrived, we headed off to Kelowna for a summer holiday (sadly before there was an Accent Inns in Kelowna). As soon as my two boys heard about Ogopogo they wanted to see if we could see this sea serpent up close. We rented a boat and cruised Lake Okanagan and there, somewhere close to Squally Point, we saw something! It wasn’t much, just something big and dark in the water – it could have been anything a log, or a pair of otters, but it was enough for all of us to believe we’d caught a glimpse of Ogopogo! Who knows? Perhaps we did!

We lived in Victoria, so when we heard about Caddy the Cadborosauras we were off out again, this time in a blow-up dinghy searching Cadboro Bay for a glimpse of the multiple humped sea monster that lurked beneath the waves. We never did see anything strange but it never stopped us looking, every time we went there.

Next time you’re staying at Accent Inns Kelowna head to high spot above the lake with a pair of binoculars and a camera with a telephoto lens and see if you can add to the many sightings of this elusive creature. In 1926, dozens of people

all claimed they saw the monster at the same time, and in 1968 a guy called Art Folden filmed something swimming across the lake causing a large wake. More recently in 2011 someone with a cell phone managed to film two dark shapes in the water. It would appear there’s something out there – but what?

So, what is it that makes us so enthralled with tales of lake and sea monsters, and even Bigfoot or Sasquatch? I have a few theories:

So, next time you’re staying at either the Accent Inns hotel in Kelowna or Victoria ask the person at reception if they can tell you about their town’s local monsters. Of course, all Accent Inns and Hotel Zed offer monster value – and that’s something you don’t need to be scared of!