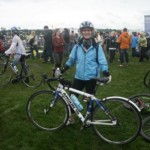 Janet Pachal rides to conquer cancer for the BC Cancer Foundation

The BC Cancer foundations “Ride to conquer Cancer” is a very special annual event. Accent Inns has had the privilege of working with and/or supporting several individuals in their efforts to raise funds for the “ride”.  Helping people suffering from cancer and ultimately finding cures for the various cancers  is a goal that is both achievable and a “must do” for our race.

The BC Cancer Foundation the BC Cancer Agency provide some of the best care and research anywhere in the world, right here in British Columbia.  We must remember though that they do not do this alone. Hundreds and hundreds of volunteers and supporters are out there everyday fundraising and supporting events just like the Ride to Conquer Cancer and they deserve a very special thank you.

This is the story of just one of those special supporters. I’m sure after you read it you too will understand….

My friend Rob wasn’t the 1st person I knew who battled cancer but his situation was the one I related to the most.  You see, Rob was about my age and our kids went to the same elementary school and played on the same sports teams. Rob was the coach.   On more than one occasion I found myself acutely aware of the fact that it was only by fate that it was Rob who was battling cancer rather than my husband or even myself.  Rob lost his battle with cancer in February of 2008.

In 2009 Rob’s good friend Kevin completed the Ride to Conquer Cancer benefiting the British Columbia Cancer Foundation.  When Kevin was looking to increase his team of one, I didn’t hesitate to sign up for the 2010 ride.  I felt compelled to do something worthwhile in Rob’s name and for those who I knew whose lives were taken by cancer. 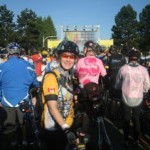 Please support or join the ride. You can make a difference!

It wasn’t until after registering that I became a little uneasy about the commitments I had made.  I now needed to get a bike, to train to ride for the 260km from Vancouver to Seattle, and fundraise over $2,500.   However, with donations from family and friends, bottle drives, a 50/50 draw and a pub-night, I raised over $4,300.  With encouragement from my family I successfully completed the 2010 Ride to Conquer Cancer in June 2010.  Over the year leading up to the ride, the challenge for me became less about cycling and raising money, and rather a more personal journey of perseverance, believing in a goal, and wanting to make a difference in the lives of others.  It is my drive to make a difference that has inspired me to do it all over again and register for the 2011 Ride.

If you would like to assist with my fund raising efforts for the 2011 Ride to Conquer Cancer, I’ve attached the web-link at the bottom of this letter. Also, I’ve added the main web-site address if you’re interested in participating in the 2011 Ride. 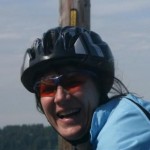 To Support Janet click here to visit her fundraising page

If you want to join the ride yourself follow this link