Playstation 4 (PS4) or Xbox for Christmas ? 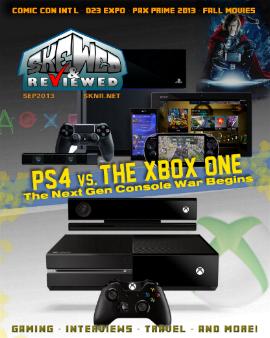 With all of the hype and hyperbole over the launch of the Playstation 4 and Xbox One starting to fade now that both systems have launched, it is time for us to give both of them a grade and that grade is Incomplete. Now I am not bashing on either of the systems but rather stating that consumers simply do not have enough information to properly evaluate their systems.

When the Playstation 3 launched, there were issues over the price of the unit, the lack of titles available and many cited Resistance as the only solid release exclusive for the PS 3 and waited patiently for future titles.This time out the Playstation 4 has Killzone: Shadow Fall and Knack as their main launch exclusives and offers several free to play games via the Playstation Store.While this is a good step in the right direction especially with a nice selection of third party games such as the latest offerings in the Assassins Creed and Call of Duty series.

Microsoft has done better with Ryse, Killer Instinct, Dead Rising 3, and Forza Motorsport 5.  A much better launch lineup for their new system and one that gives fans a nice selection especially when third party titles are factored in. That being said fans need to look at the bigger picture before saying that one system is better than the other. The Wii U launched last year and outside of ZombieU and Super Mario Bros, the selection of exclusives for the system have been sadly lacking. One year later we have a new Mario game and a new Zelda game as well as Mario Kart 8 and Donkey Kong Country:  Tropical Freeze due soon.

One year later, the system is finally getting exclusives that will not only help show off the abilities of the system but will help justify owing the system. The reason for the lack of launch title exclusives is fairly simple. A new system being designed is undergoing changes so developers are often forced to start design work on games with a final set of hardware to work with so you tend to get fewer games as developers have to learn to work with a new system, meet deadlines from the manufacturer, and learn as they go along.

This is why many current PS 3 games such as The Last of Us look and play significantly better than the titles at launch. Resistance 3 despite some issues is a much better game than Resistance yet they both were designed for the same system. What are the reasons for the improvement? Simply a better system that has been upgraded through firmware updates and designers who are far more comfortable in designing for the system now they have had years of experience with it.

So where does that leave the PS 4 and the Xbox One?  It leaves them as systems that are still being tweaked. Think of the launch as sort of a beta test. The PS 4 had some issues with the Blue Line of Death while the Xbox One had issues with the optical drives and slow load times. As developers research the issues and develop software and hardware work arounds, the issues will be addressed and the systems will likely also have new features added. Let us not forget that Sony made the PS 3 into a 3D Blu-ray player via a firmware update which opened up new dimensions of 3D gaming and movies for the system. As the systems begin to evolve, developers will become more and more creative with the systems and their present and future abilities and as such, consumers will see bigger and better games and features.

The PS 3 and Xbox 360 are very different now than they were at launch especially when you factor in The Move and Kinect.  As such it is only common sense that the PS 4 and Xbox One still have changes to come so that is why we cannot give either system a grade beyond Incomplete as we still have not seen what the systems are truly capable of.