Pink in the Rink 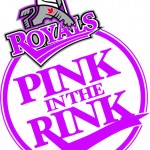 Pink in the Rink supports BC Cancer Agency

Victoria, BC – The Victoria Royals would like to remind fans that a limited number of tickets are still available for the club’s “Pink In The Rink” night being held this Saturday, January 28th. Tickets can be purchased at the Select Your Tickets box-office located at the Save-On-Foods Memorial Centre.

Fans can see the Royals in their special edition “Pink In The Rink” jerseys as they take on B.C. Division rival the Kamloops Blazers. Puck drop is set for 7:05 p.m. Selected jerseys will be auctioned off following the game, with all proceeds going towards the B.C. Cancer Foundation.

Fans in attendance that evening will have a chance to win a variety of prizes, including airfare, accommodation and park passes for four people to Disneyland courtesy of Hillside Centre. Fans could also win tickets to a Vancouver Canucks’ game along with accommodation in Vancouver courtesy of Accent Inns. In addition, fans could win a trip across the province to watch the Royals take on B.C. Division rivals such as the Vancouver Giants, Kelowna Rockets and Kamloops Blazers, with accommodation and tickets provided by Accent Inns.

Several promotions will be running during the game with all proceeds going towards the B.C. Cancer Foundation. The Seafirst Shoot Off will give one lucky fan a chance to shoot 10 pucks on net, with Seafirst Insurance Brokers donating $250 for each puck to the BC Cancer Foundation.  The contestant will also have the chance to win a pink Blackberry Curve courtesy of Telus and Tom Harris Cellular.

RBC’s Crunch Time promotion will give two fans the chance to win a pair of Royals’ tickets and dinner for two at the Lion’s Den Restaurant at the Save-On-Foods Memorial Centre. Fans will compete in a memory card game, with the winner having a $1,000 donation from RBC made to the B.C. Cancer Foundation made in their name.

Fans will also have the chance to compete in a Chuck-A-Puck contest to win an iPod Nano courtesy of Simply Computing, a pair of Beats Solo HD Headphones from Mike’s Hard Pink Lemonade, as well as two tickets to see Danny Bhoy perform at the McPherson Playhouse on March 30th courtesy of 103.1 JACK-fm and Ocean 98.5.

If you would like to make a direct donation to Pink in the Rink supporting the B.C. Cancer Foundation, please visit our donation page: http://donate.bccancerfoundation.com/goto/pinkintherink

For more information or to purchase your tickets today, please visit the Victoria Royals Ticket Office, www.victoriaroyals.com, or call 250-220-7889.