Big Prizes for Pink in the Rink – Feb 4th 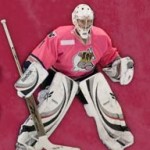 It’s time to buy those tickets as the Victoria Salmon Kings host the 4th annual Pink in the Rink night!

Victoria, BC – The Victoria Salmon Kings, proud affiliate of the Vancouver Canucks and Manitoba Moose, announced today that they have once again partnered with the BC Cancer Foundation (BCCF) to present their fourth annual “Pink in the Rink” night on Friday, February 4th, 2011.

For this year’s annual event sponsored by 103.1 Jack FM and 98.5 The Ocean, the Salmon Kings will be wearing brand new pink jerseys for one night only! Salmon Kings’ players will be promoting the annual event, helping accept donations and signing autographs today at Hillside Centre between 4:00 – 5:30 p.m. Fans will also get a chance to get a sneak-peek at this year’s Pink in the Rink jerseys!

Accent Inns has donated a raffle prize of an “Explore BC” package valued at $1,500 that includes one night at five different locations in British Columbia and passes to great attractions in each city including the National Geographic Imax including dinner at the old spaghetti factory, Hyak Wilderness Adventures, Metropolis at Metrotown, BC Wildlife Park and tickets to Riverdance! Cascadia Liquor will be raffling off a “Best of BC” wine basket ($300 value) and a Truffles Group prize package valued at $350. Mike’s Hard Lemonade will be giving away three jackets valued at $300 each, while also donating $1 from each sale of Mike’s Pink Lemonade at the game to the BCCF. Telus will also be on hand during the intermissions to give away an Apple iPad and BlackBerry Curve.

Several pink game-worn jerseys will be auctioned off throughout the week leading up to the event online, at the game and also at a special post-game live auction. Two pink jerseys from last year are available for auction right now online.  The “Think Pink and see Elton at the Rink” package includes two tickets to see Elton John’s sold-out concert at the Save-On-Foods Memorial Centre next month, four tickets to this year’s Pink in the Rink game and a signed pink Taylor Ellington jersey. Scott Howes’ game-worn pink jersey from last season is also available to bid online now thru tomorrow morning at 10:00 a.m., and can be bid on by visiting http://cgi.ebay.ca/ws/eBayISAPI.dll?ViewItem&item=320642010752.

The Salmon Kings are offering a special promotion rate of $17 for advance tickets or $60 for a family four pack. With these purchases, $5 from each single ticket sale and $20 from each four pack being will be donated back to the BCCF. Make sure to get your tickets now, as they must be purchased before February 3rd to qualify for a donation to the BCCF!

Fans in attendance can also purchase a special pair of pink light-up thundersticks by donation! A pair of thundersticks will also be included in all family four-packs sold to Pink in the Rink. The BCCF will also be handing out limited pink and grey toques and scarves for a suggest $5 donation. Hillside Centre will be on hand providing sales from their “Believe” merchandise.

BCCF volunteers will also have an information table set up in the main concourse of the Save-On-Foods Memorial Centre and will operate the evening’s 50/50 and Chuck-a-Puck promotions. The Chuck-a-Puck will give fans chances to win two tickets to Legally Blonde:  The Musical in Vancouver and Helijet transportation courtesy of Rogers, a Hillside Centre gift card valued at $200, two tickets to see Sarah McLachlan live at the Save-On-Foods Memorial Centre in March courtesy of the Times Colonist and one year of one year of OPTIK TV with a free PVR rental courtesy of Telus.

There will also be large pink ribbons placed in the slot area between each offensive faceoff circle for the entire series.

During the Pink in the Rink game, the Salmon Kings will welcome back SuperSauce for another “Band in the Stands” evening where only live music will be played before and during the contest!