Motorcycle enthusiasts have their driving directions all planned 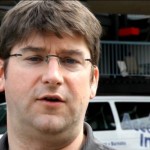 The Accent Inn Vancouver Airport hotel played host to Joe and Flora Lloyd recently to help them prepare for their three month cross Canada bike trip. Their ‘Reconnecting with Canada’ film series is coming to Canadian towns from BC to the Maritimes and all the way back by BMW.

Canadian filmmakers Joe and Flora Lloyd lived Down Under for eight years. After the successful launch of their Australian cross country film series, they are “Reconnecting with Canada” from a BMW motorcycle filming en route-covering 400 kilometres per day over three months and three coasts, and as much quality footage can be fit into two film series.   Ambitious?

“Our Australia films prepared us for the technical aspects of filming en route, but we are seeing our country with new eyes, meeting fantastic people, and discovering geography, cultures and traditions we knew nothing about and we suspect, neither will many Canadians,” said Joe Lloyd from his cell phone en route recently.

The couple are creating a weekly “on-the-go” web series available for free viewing.  The web series is edited and distributed on the road and is a casual look at what they do. They encourage embedding , posting or sharing the web series.

Their second project, is a feature film series of 13 one hour shows bound for Video on Demand, Itunes, and TiVo distribution.  “This is a storyline driven feature, myself and Flora return to Canada after eight years overseas.  We have never traveled our own country and are on a mission to reconnect with Canada. So far, we are overwhelmed by peoples’ hospitality and the incredible landscapes,” says Lloyd.

The couple’s adventures have already been covered in newspapers and live radio, offering up-to-the-minute coverage.

SCHEDULE: Check when they will be in your area, and queue up stories in advance. The calendar

To plan your own journey why not visit the Accent Inns website and check out the Explore BC section along with all the wonderful packages.