Fish for the Future 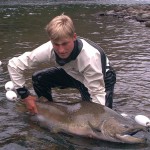 Victoria, B.C. – Accent Inns hotels has just launched a new program that will see to the long-term viability of British Columbia’s natural resources, as they continue to fulfill their vision of supporting local groups that strive towards improving the B.C. environment.

“Building business and building community truly go hand-in-hand,” said Accent Inns CEO Mandy Farmer. “And in launching ‘Fish for the Future’ program, we’re showing that it’s possible for every one of us to make a positive difference in our world – a core value held by Accent Inns.”

The program, underway this month, is simple to support. For each guest who stays at any one of the BC hotel’s locations and shows a valid freshwater or salt water fishing license, Accent Inns will donate $2.00. Accent Inns ‘Fish for the Future’ partners are: Freshwater Fisheries Society of B.C. and Pacific Salmon Foundation. In addition, the Accent Inns Vancouver Airport hotel also has supporting services for the fishing enthusiasts with free shuttle service to the South Terminal / float plane terminal for the ‘fly-in’ fisherman as well as providing freezer service.

Many fish populations native to British Columbia are at serious risk due to the destruction of habitat, unsustainable harvesting and the introduction of non-native species. Both the Freshwater Fisheries Society of B.C. and the Pacific Salmon Foundation work to conserve wild fish, provide education, and, over the longer term, to rebuild fish populations. Their commitment, with public support, will enable long term ecological sustainability and social enjoyment of this important aspect of province’s economy.

“Wild Pacific salmon are critical to the overall health of our environment, and businesses like Accent Inns play a very important role by engaging their customers, employees and business partners on behalf of salmon,” said Dr. Brian Riddell, president and CEO of the Pacific Salmon Foundation. “More than 200 businesses support the Pacific Salmon Foundation, but Accent Inns’ new ‘Fish for the Future’ program is particularly special because it educates the broader public about the importance of wild Pacific salmon conservation, and the role all of us have to play on behalf of the environment.”

With locations in five British Columbia communities: Burnaby, Kelowna, Kamloops, Richmond (Vancouver Airport) and Victoria, Accent Inns supports a variety of community-based activities that emphasize making a difference in people’s lives today and in the future. Programs vary from location to location and include food and clothing drives and donations to homeless shelters, the Salvation Army, the TLC and The Royal Canadian Legion.

In addition to its community programs, Accent Inns are also committed to sustainability and reducing environmental impact. And in recognition of Accent Inns’ commitment to protecting the natural world through a range of practices and policies, all of the B.C. hotels have been rated as “Four Green Key” by the Hotel Association of Canada – the second-highest available rating. 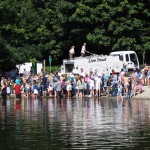 Restocking plays an important role in the future of fish stocks

For more information on Accent Inns ‘Fish for the Future’ program and Accent Inns locations call 1-800-663-0298.

FFS-BC is a non-profit organization who works in partnership with the provincial government to deliver the fish stocking program, promote sport fishing development and provide conservation fish culture services that support steelhead and sturgeon recovery programs.

The Pacific Salmon Foundation is the trusted voice for the conservation and restoration of wild Pacific salmon and their ecosystems and works to bring salmon back, stream by stream through the strategic use of resources and local communities.

The award-winning Accent Inns is a family-owned and operated company based in Victoria, British Columbia, with hotels located in Victoria, Richmond, Burnaby, Kelowna and Kamloops. All Accent Inns are rated 3 1/2 stars and have developed a reputation for their accent on quality, reasonable rates and excellent service.

« Lessons From the Land and Sea – and people
Carbon Neutral – Our Environment goes green…. »