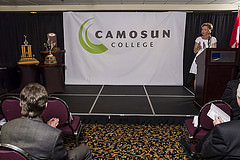 This is a re-post courtesy of the Camosun Chargers

Third-year Chargers golfer Brady Stead from Vernon, BC took the spotlight earning the prestigious President’s Cup award for his outstanding achievements in academics and athletics.

Brady earned an 8.5 grade point average in his Fall 2014 studies in Camosun’s BBA Marketing program to achieve top academic status among the College’s student-athletes. In addition to peaking in his studies, Brady was a key factor on the leaderboard helping Camosun to two silver medal finishes at this year’s PACWEST Provincial and CCAA National Golf Championships.

Known for his dedication to good causes and a tireless work ethic, Brady spends much of his spare time in the community helping coach golf at his former high school, refereeing minor hockey and raising money for charity and research.

“I am continually impressed by the achievements of the Chargers student-athletes,” stated John Boraas, Camosun College Vice President Academic. “Camosun is extremely proud of all the accomplishments the Chargers athletes have made.”

Fourth-year men’s volleyball middle Alex Sadowski was the recipient of the Linda Henderson Award for Excellence for demonstrating commitment, strength of character and a high level of proficiency in the sport of volleyball.

In his first year with the Chargers Alex earned the PACWEST Rookie of the Year Award and in the three year that followed, he was named a First Team PACWEST League All Star. Over the past four years, the 6’7” Chargers co-captain has earned four CCAA National Scholar awards, two CCAA Academic All-Canadians, two PACWEST Academic Excellence awards and three PACWEST Athlete of the Week awards. Most recently, Alex was named a First Team All-Star at the 2015 CCAA National Men’s Volleyball Championships.

“Alex embodies all that it is to be a Charger,” commented Linda Henderson via telephone from the Northern Alberta Institute of Technology in Edmonton. “He is the best of the best.”

The Derek Twomey Scholarship for Sport was awarded to fourth-year Chargers men’s volleyball  setter Vitor Macedo (Rio de Janerio, Brazil) who was selected by Derek’s former team mates and coaches as the winner of the scholarship for his fighting spirit, burning desire to win, commitment to excellence and unbridled enthusiasm and affection for his teammates. 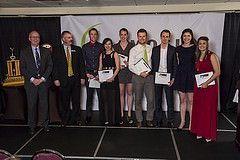 Fifteen student-athletes were recognized for their outstanding academic and athletic accomplishments at the Provincial and National levels. The PACWEST and CCAA awards were sponsored by Wilson’s Transportation: 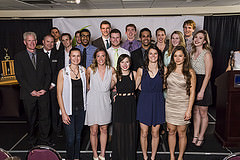 “This was a banner year for the Chargers,” said Camosun Recreation and Athletics Coordinator Graham Matthews.  “Our student-athletes and coaches worked extremely hard and earned an unprecedented number of medals and honours, and we could not be more proud!”

This year’s medal finishes for the Chargers include:

Check out the Chargers year-end video.