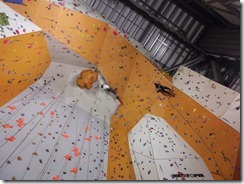 With the Accent Inn  being the host hotel for the Youth Western Regional Climbing Competition being held in Victoria BC at The Boulders Climbing Gym this weekend, a small group of intrepid adventurers from the hotel decided we should check out the Gym to see what indoor rock climbing is all about.

Kyle, Whitney, Diane and I headed out for an introductory climbing lesson delivered by a knowledgeable and entertaining instructor named Evan. We listened to Evan’s every word as he gave us instructions on our harnesses, rope tying and belaying. There was quite a bit of nervous laughter as we all knew the end result would be climbing to the top of a wall, balancing our feet and grasping with our fingers to tiny hold shaped like animals and placed at distances that seem way too far apart.

Sometimes we glanced at the 2 climbers sharing our wall as they scrambled up and down. They made it look pretty easy.

When all instruction was complete, Kyle was the first to ascend, with Whitney as his belay partner. Kyle had done some climbing before and was able to quickly ascend the wall. He tested out the belaying skills of his partner by pretending to fall and we all felt a little bit relieved when we saw that Whitney was easily able to keep him from succumbing to the forces of gravity. It looked like a lot of fun. 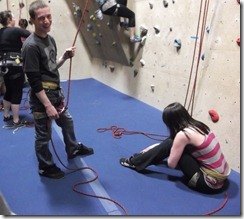 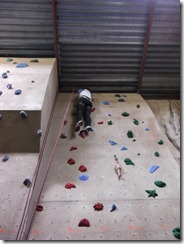 e advantage of height on her side when she started her climb. However height is no help when you look up and down and realize the task you have to complete. After a slight hesitation she continued to the top. However, I’m pretty sure I heard a big sigh of relief when she melted into the floor at the end of her turn.

When my turn came, I soon learned the disadvantage of being a bit on the short side. Those holds always seemed just a little bit out of my reach. However, my awesome team of co-workers assisted with encouragement and advice and after a few false starts, I found myself at the top of the wall, ecstatically ringing the bell to indicate my success. On the way up, I recalled Kimanda Jarzebiak, Director of Operations at The Boulders, telling me how rock climbing is being used as part of stroke rehabilitation as the problem-solving required assists in the re-building of neural pathways. That made perfect sense to me and I found myself having to make decisions as to which hand hold would be best to get me to the next foothold.

Diane acted as my belay partner and I felt totally confident that she would take care of me on my climb. Throughout the lesson she had demonstrated great skill at learning knots and techniques and she easily put them into use as I ascended and descended the wall. I tried to be as efficient as I belayed her on the final climb of our lesson. 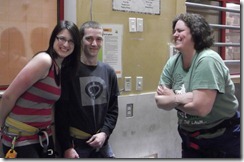 Adrenaline was high as we all grinned and congratulated ourselves on our amazing endeavour. The wall had seemed so high.

Evan then took us on a tour of this incredible facility and we realized just how many more challenges were available for anybody who decided to take up this sport. With 1208 m of wall space, The Boulders is one of 2 facilities in North America able to host the World Youth Climbing Championship, which they will do in 2013.

If you get a chance, drop by the gym this weekend to watch the competition. Further information is available on their website The Boulders Climbing Gym. Be sure to watch the video.

Learn about the Boulders and other great things to do in Victoria BC by visiting the link on the Accent Inn Victoria BC hotel webpage.